LAHORE - The Lahore High Court (LHC) on Saturday ordered the unconditional removal of ailing Nawaz Sharif 's name from the no-fly list, allowing him to travel abroad from his treatment.

The former prime minister has been given four weeks period, which is extendable on the basis of medical reports, said a verdict announced by a two-member bench headed by Justice Ali Baqir Najafi and comprising of Justice Sardar Ahmad Naeem

The court announced its decision on a petition filed by Pakistan Muslim League-Nawaz President Shehbaz Sharif seeking unconditional approval for the removal of his brother's name from the ECL .

Shehbaz Sharif in his undertaking stated that he would "ensure return of Nawaz Sharif within four weeks or on certification by doctors that he has regained his health and is fit to return back to Pakistan ".

"I further undertake to provide/send the periodical medical report of the doctor duly notarised by the embassy to the registrar of this court," said the document signed by Shehbaz. 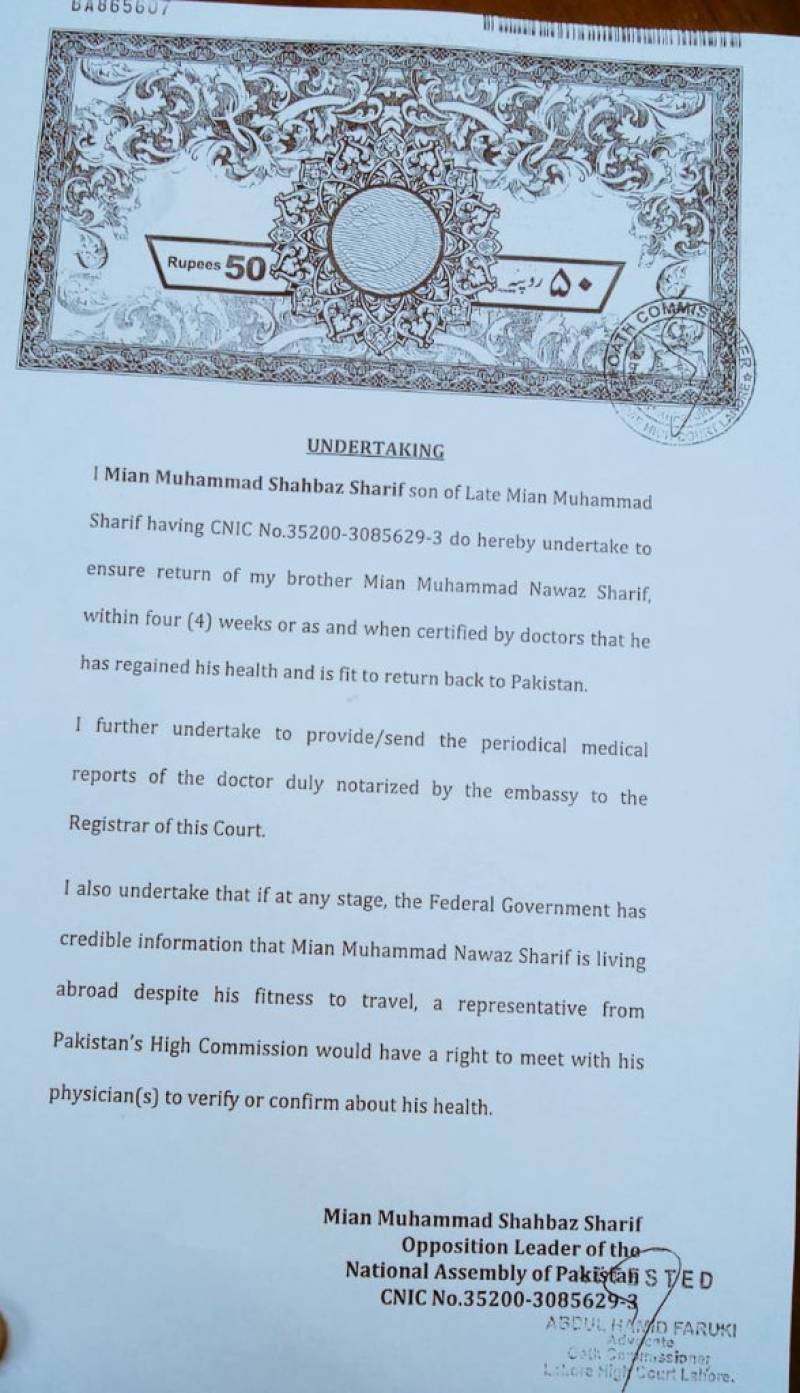 "I also undertake that if at any stage, the federal government has credible information that Mian Mohammad Nawaz Sharif is living abroad despite his fitness to travel, a representative from Pakistan 's High Commission would have a right to meet with his physician(s) to verify or confirm about his health."

An undertaking by Nawaz Sharif assuring his return upon being healty was also submitted to the court. 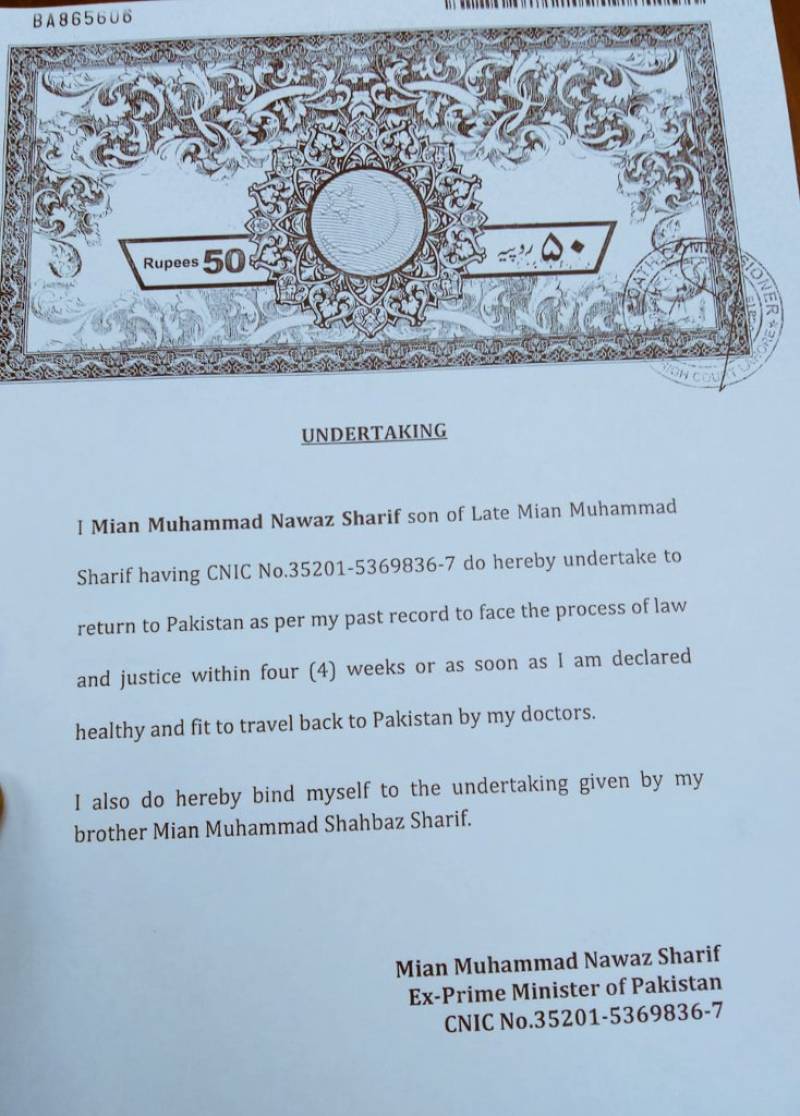 Shehbaz also challenged the government's demand for surety bonds worth Rs7-7.5 billion against a 'one-time permission' to Nawaz Sharif for his treatment abroad.

The court, according to the PML-N president, has also dismissed the condition of submitting the indemnity bonds.

Earlier today, the LHC presented petitioner Shehbaz Sharif and the federal government’s counsels a proposed draft on the undertaking for the former premier's unconditional travel to abroad.

The court created its own draft of Shehbaz’s undertaking guaranteeing the return of his brother after the siblings and the government's counsels failed to reach an agreement on the phrasing of the draft and its terms.

Additional Attorney General Ishtiaq A Khan raised the objection of the court's proposed draft while Shehbaz Sharif accepted its all terms and phrases.

The two-member bench rejected the government's objections and ordered the authorities concerned to strike the ailing ex-premier's name off the ECL , serving a major blow to the government.

A written verdict, which is necessary to get removed Nawaz's name from the ECL , will be issued once the ailing former premier submits its undertaking.

The LHC later adjourned the hearing of the case until January 2020.

LAHORE – Leader of Opposition in National Assembly Shehbaz Sharif has submitted an affidavit before ...

Nawaz Sharif , Pakistan 's longest-serving premier, was ousted from his third term in office in 2017 and later jailed on corruption charges.

His health deteriorated while in prison and he suffered a minor heart attack last month, his party said, while his doctor Adnan Khan claimed on Twitter that the ex-leader was "fighting for his life".

He was bailed last month and briefly hospitalised before being taken to an intensive care unit set up at his home in Raiwind, just outside Lahore.

Sharif, who is suffering from an autoimmune blood disorder, also has high blood pressure and his kidney functions are deteriorating, according to aides.

They have said the unexplained cause and uncertain diagnosis require advanced investigations and specialised care.

Prime Minister Imran Khan has said several times that he will not seek to use Sharif's illness for political gain, while the federal government previously said it would not block requests to remove him from a travel ban list.

This week, however, the government of Sharif's rival Imran Khan added a condition to his travel, saying he must pay a bond of seven billion rupees ($45 million) -- which Sharif's party, the Pakistan Muslim League-Nawaz (PML-N), immediately rejected.