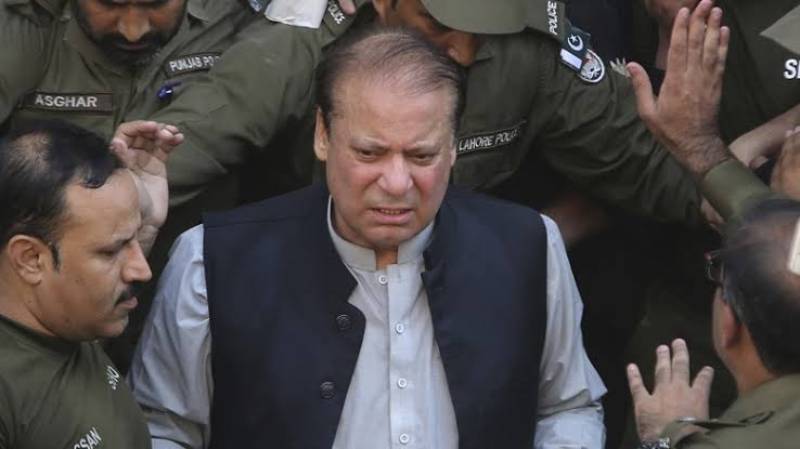 LAHORE – Leader of Opposition in National Assembly Shehbaz Sharif has submitted an affidavit before the Lahore High Court, in which he has assured return of his convicted brother Nawaz Sharif to the country to face the cases in different courts.

Shehbaz, who is president of Pakistan Muslim League-Nawaz (PMLN-N), submitted a hand written two-page affidavit before the LHC division bench through his counsel Amjad Pervez during Saturday's hearing. The draft said that Nawaz Sharif was going to London on doctors' recommendations and would immediately return to Pakistan following his recovery.

The high court had yesterday dismissed the National Accountability Bureau (NAB) and the federal government's stance challenging the maintainability of the plea, calling it “admissible”, and had fixed the case for hearing on Nov 16 (today).

According to Nawaz Sharif’s personal physician Dr Adnan, Dr Tahir Shamsi will conduct today a medical checkup of the ailing politician, who served as prime minister for two incomplete terms. Further medical tests will be conducted and adjustments in his medicines will be made.

During yesterday's hearing, the federal government had urged the court to maintain its condition of seeking a security bond from the former prime minister.

Additional Attorney General Ishtiaq A Khan, who represented the government, had objected to the maintainability of the petition and contended that the ex-premier should approach the Islamabad High Court instead for removal of his name from the ECL .

The government in its 45-page reply opposed the removal of Nawaz Sharif’s name from ECL without a security bond.

It argued that the PML-N supremo was convicted which is why he should not be allowed to leave the country without submitting a security bond.

The accountability watchdog also submitted its four-page reply to the court.

On the other hand, Sharif's counsel Amjad Pervez stated that the LHC could hear the petition as the NAB was a federal institution. The counsel argued that the condition of furnishing Rs7.5 billion surety bonds was not based on any provision of law.

The high court later released its three-page order and rejected federal government and NAB's objection regarding maintainability of the petition.

Nawaz Sharif , Pakistan 's longest-serving premier, was ousted from his third term in office in 2017 and later jailed on corruption charges.

His health deteriorated while in prison and he suffered a minor heart attack last month, his party said, while his doctor Adnan Khan claimed on Twitter that the ex-leader was "fighting for his life".

He was bailed last month and briefly hospitalised before being taken to an intensive care unit set up at his home in Raiwind, just outside Lahore.

Sharif, who is suffering from an autoimmune blood disorder, also has high blood pressure and his kidney functions are deteriorating, according to aides.

They have said the unexplained cause and uncertain diagnosis require advanced investigations and specialised care.

Prime Minister Imran Khan has said several times that he will not seek to use Sharif's illness for political gain, while the federal government previously said it would not block requests to remove him from a travel ban list.

ISLAMABAD - Prime Minister Imran Khan on Friday said that he had no enmity with Nawaz Sharif, terming the health of the ...

This week, however, the government of Sharif's rival Imran Khan added a condition to his travel, saying he must pay a bond of seven billion rupees ($45 million) -- which Sharif's party, the Pakistan Muslim League-Nawaz (PML-N), immediately rejected.