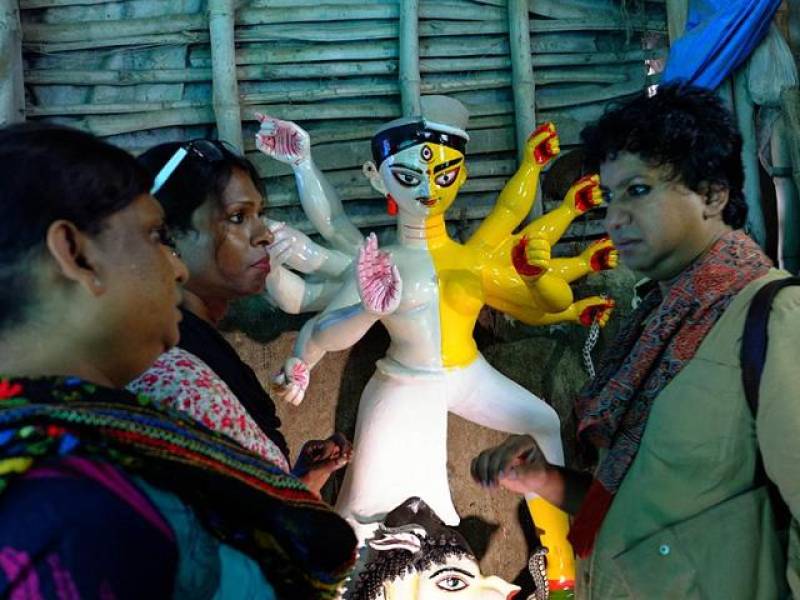 KOLKATA (Web Desk) - Among the thousands of puja pandals that dot Kolkata, a small-budget puja committee in Sovabazar will stand out this year.

Udyami Yubak Brinda Durga Puja committee, a paara (community) organisation, in partnership with transgender rights activist group Pratyay Gender Trust, is all set to make history with its idol that has been modelled on the Ardhanarishwar or the composite androgynous form of Lord Shiva and his consort Parvati.

The idol was made by China Pal, one of the very few woman artists of Kumartuli, the hub of artisans in Kolkata, Hindustan Times reported.

Kolkata’s community pujas are known to experiment with different themes carrying social messages -- from protecting the environment to the scourge of dowry -- and this attempt at mixing the masculine and the feminine in the same body is an effort aimed at a creating space for the city’s transgenders, say organisers.

They say it will create a platform for a gathering and enjoying the biggest socio-religious festival in West Bengal together, apart from creating awareness about the rights of the community in the society. There was no resistance when they mooted the idea.

According to a transgender member of the organising committee, members of their community face a lot of humiliation when they go from one pandal to the other.

“Our puja will not only provide a space for the people from the community to have a common and comfortable gathering platform but also offer a chance to enjoy puja together and socialise,” he said.

“This is an attempt to bring an end to that discrimination cutting across caste and gender lines,” he said.

Kaushik Gupta, a criminal lawyer at the Calcutta high court and a leading face of Kolkata’s LGBT (lesbian, gay, bisexual, transgender) rights movement, said this puja is the right event in the right time.

The total budget of the puja is roughly around Rs 1,50,000 for the 10-day celebrations and the unique idol will be worshiped on Panchami or the fifth day.

The state government has also taken an initiative to reserve beds in state-run hospitals for members of the transgender community and also to introduce the benefit of sex reassignment surgery in such hospitals.

Kolkata Municipal Corporation too has put in an effort and decided to induct five transgender members into a panel of judges that will go around the city to judge the best pujas in the city.