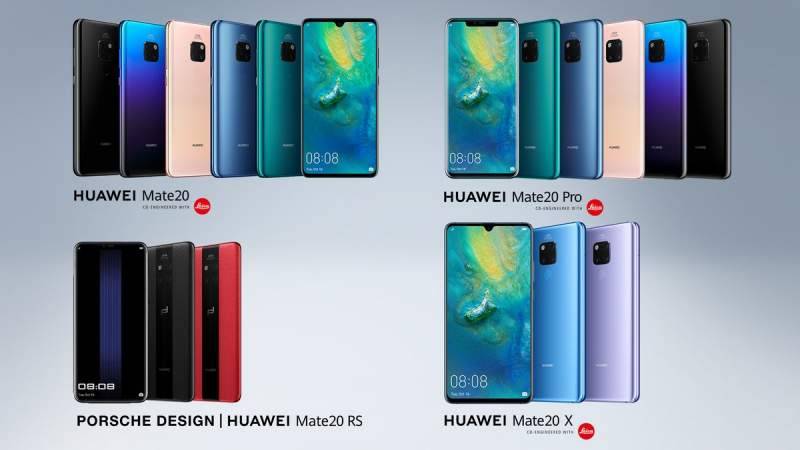 The Huawei Mate 20 Series embodies the pinnacle of innovation, designed with the industry’s most powerful and sophisticated process technology.

The launching event was streamed live on the company’s official YouTube channel and Twitter account for fans all over the world to come together and watch the action unfold in real-time.

The Huawei Mate 20 Series is powered by the company's densest and highest performing system on chip (SoC) to date—the Kirin 980. Manufactured with the advanced 7nm process incorporating the powerful Cortex-A76-based CPU and Mali-G76 GPU, the SoC offers improved performance and an unprecedented smooth user experience.

Giving you the gift of time. With the 40W SuperCharge, you can have 70% battery power in just 30 minutes. #HUAWEIMate20 #HigherIntelligence pic.twitter.com/RKh4HbijXy

The Hyper Optical Pattern on the glass back plays with light and shadows, producing an iridescent optical effect that is immediately captivating. The Matrix Camera System adopts the iconic Four-Point Design that exudes personality, giving the device a unique visual identity that is recognizable even at a distance.

The newly launched Mate 20 Series is shipped with the highly customized Android P-based EMUI 9 operating system, on which consumers can enjoy all productivity and entertainment features easily and conveniently with a few simple taps and swipes.

“Smartphones are an important entrance to the digital world. The Mate 20 Series is designed to be the best ‘mate’ of consumers, accompanying and empowering them to enjoy a richer, more fulfilled life with their higher intelligence, unparalleled battery lives, and powerful camera performance,” said Richard Yu, CEO of Huawei Consumer BG.

Huawei has innovatively designed a three-tier architecture that consists of two ultra-large cores, two large cores and four small cores. This grants the CPU the flexibility to allocate the optimal amount of resources to heavy, medium and light tasks for unprecedented levels of efficiency, simultaneously improving the performance of the SoC while enhancing the battery life. The Kirin 980 is also the industry’s first SoC to be equipped with Dual-NPU, granting it higher On-Device AI processing capability to support any and all AI applications.

Besides superb performance, the Mate 20 Series also features groundbreaking improvement on battery life. The Mate 20 Pro houses a large, high-density 4200mAh battery, and supports 40W HUAWEI SuperCharge, which gives the device 70 percent charge in 30 minutes. The safety of the technology is certified by TÜV Rheinland.

Live life in the fast lane. With the world's fastest 15W wireless charge, you can boost your battery in the shortest time. #HUAWEIMate20Pro #HigherIntelligence pic.twitter.com/5OrKkoyXzF

The HUAWEI Mate 20 X supports an ultra-large 5000mAh battery and is equipped with a revolutionary company's super cool system that uses a combination of graphene film and the vapour chamber to deliver outstanding cooling performance.

With the cooling system in place, the CPU and GPU embedded in Mate 20 X can remain at full throttle for an extended period of time and deliver the smoothest and most satisfying gaming experience to consumers. The super cool system also marks the first time graphene is utilized to cool smartphones.

Building on the foundation of P20 Series’ camera system, Huawei augmented the Mate 20 with a powerful addition—16mm Leica Ultra Wide Angle Lens. This wider perspective creates a sense of spaciousness and a three-dimensional (3D) effect to the images.

Make fantasy a reality. With 3D Live Object on the #HUAWEIMate20Pro you can capture an item and then bring it to life. #HigherIntelligence pic.twitter.com/gaZQjWb2SI

The new camera system also supports macro distance, which produces crisp images of objects that are placed as close as 2.5cm from the lens. The added ultra-wide angle lens and macro support complete the feature set of the camera system, elevating it to a truly all-round camera that is ready to capture any and all action.

The Huawei Mate 20 Pro is equipped with a 40MP main camera, a 20MP ultra-wide-angle camera, and an 8MP telephoto camera. Together, the trio of lenses supports a wide range of focal lengths (equivalent to the performance of a 16-270mm zoom lens), enabling it to mimic the results from professional cameras.

The Mate 20 Series also features an AI Portrait Color video mode. Using AI, which can isolate human subjects and desaturate the colors around them to dramatically highlight the person. AI Spotlight Reel identifies clips with a shared theme and auto-generates a montage, made entirely of highlights.

Give life a splash of colour. With AI Portrait Mode on the #HUAWEIMate20 you can film with a Hollywood effect and create your own work of art. #HigherIntelligence pic.twitter.com/eCdHSDxHG4

Mate 20 Pro and PORSCHE DESIGN  Mate 20 RS both support 3D Face Unlock. The solution quickly and securely authenticates users within 0.6s at a false acceptance rate of below 1/1,000,000.

Using the 3D Depth Sensing Camera System located at the front, the two devices can accurately read the facial features of a subject and recognize even small details. Besides user authentication, this suite of sensors also enables the portrait beautification effects to be realized in a more natural and effective way.

The Mate 20 Series comes with EMUI 9.0, a smart operating system based on Android P. Through AI self-learning algorithms, an integrated and granular resource allocation system, and a highly optimized Android environment, EMUI 9 delivers an “evergreen” experience—it remains smooth even through extended use.

EMUI 9.0 incorporates a unified, ergonomic design and a streamlined settings menu. The new gesture navigation support allows users to effortlessly interact with their devices using just taps and swipes. It also introduces new AI features that enable the smartphone to perform or enhance a range of tasks from object identification to food calorie counting. Using 3D Live Object Modeling, consumers can even create a fun digital avatar to dance or interact with.

As a key pillar supporting Huawei’s all-connected, all-scenario ecosystem, Huawei Share 3.0 delivers a revolutionary improvement in device interconnection, allowing users to transfer files between smartphones and PC. This is an innovative, Huawei-proprietary solution that enables device interconnectivity. It revolutionizes the way people transfer images and videos: all it takes is one tap to establish a connection between a smartphone and a PC for easy and fast file sharing.

As an expression of the Mate Series DNA, all devices carry a FullView display with a high screen-to-body ratio. Compactly engineered, every device from the 6.39-inch Mate 20 Pro to the 7.2-inch Huawei Mate 20 X can be comfortably used with a single hand.

The grace of natural elements is captured on the design of the Mate 20 Series. In particular, the Mate 20 Pro’s chassis is curved on all eight sides—a marvel to behold, and a pleasure to hold in the hand. For the PORSCHE DESIGN Mate 20 RS, Huawei and Porsche Design ingeniously combined race track elements with premium materials to create a device that exudes elegance and offers a firm, ergonomic grip.

The Matrix Camera array on the back of the Mate 20 Series features a four-point design with the three cameras and sensor encircled in a polished metal frame, producing an avant-garde look that is both bold and distinct. The flagship series comes in a new Emerald Green colorway, which is as brilliant as its namesake gemstone. The Hyper Optical Pattern on the glass back uses a complex hairline pattern to produce an iridescent effect that is not only highly durable but also makes the device easy to grip and fingerprint resistant. The devices retain a clean look even when they have been used extensively.

The new Huawei Mate 20 Series, WATCH GT, Band 3 Pro will go on sale in countries including the U.K., France, Italy, and the United Arab Emirates soon.