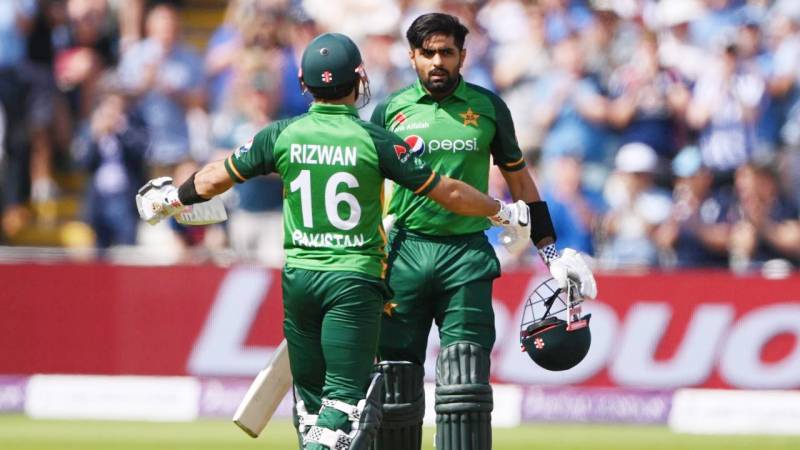 KARACHI – After a major blow in the One-day International (ODI) series against England, Pakistani captain Babar Azam along with star player Mohammad Rizwan broke multiple records including the highest ever T20I team total by Green Shirts.

Highest-ever total by Pakistan in T20

Fakhar Zaman, 26 off 8, and Mohammad Hafeez, 24 off 10, provided the perfect flourish with their 46-run partnership off just 16 deliveries to guide Pakistan to a record total.

Most T20 runs in a calendar year

Right-handed batsman Rizwan, with his 63, took his total T20I runs tally for the ongoing calendar year to 593 runs to surpass the record of Fakhar Zaman. Earlier in 2018, Fakhar set the record with 576 runs.

Meanwhile, it’s not the end here as there’s a number of T20I scheduled in 2021 for Pakistan and that comes with a chance to break the Paul Stirling record who scored 748 runs back in 2019.

In another record, the 26-year-old captain for the 10th time scored a 100 plus in a T20I game - the most century stands for any Pakistani batsman. He also stands second in the world.

Babar and Rizwan have batted together 12 times and share 670 runs together. The batting pair of Shoaib Malik and Umar Akmal added 797 in 24 innings together, while Mohammad Hafeez and Ahmed Shahzad have 741 runs in 21 innings as batting partners.

Only two pairs in the world - Shikhar Dhawan and Rohit Sharma and Martin Guptill and Kane Williamson have more century stands than Babar and Rizwan. The Indian and Kiwi pair scored four century stands apiece to their credit.

BIRMINGHAM – Pakistan outclassed England in the first Twenty-20 of three match series at Nottingham on Friday, ...

The 85 of Pakistani captain was his 20th score of 50 or more in a T20I inning and the tally also includes a century. Besides all feathers in his cap, Babar reached this landmark in the 53rd inning of his career while no other batsman has achieved this feat this quick since their debut.

Indian Captain had 18 scores of fifty or more and accumulated 1983 runs as compared to Babar’s 2120 runs after 53 innings.

Fifth pair of father and son playing for team Pakistan

The son of former Pakistani skipper Azam Khan made his international cricket debut and the duo has become the fifth father-son to represent Pakistan.

England Won the toss and decides to bowling first.

A bumper clash of cricket will be offered to spectators in the ICC T20 World Cup 2021 as Babar Azam’s Pakistan ...