Amir Khan visits Thar, announces the construction of a hospital 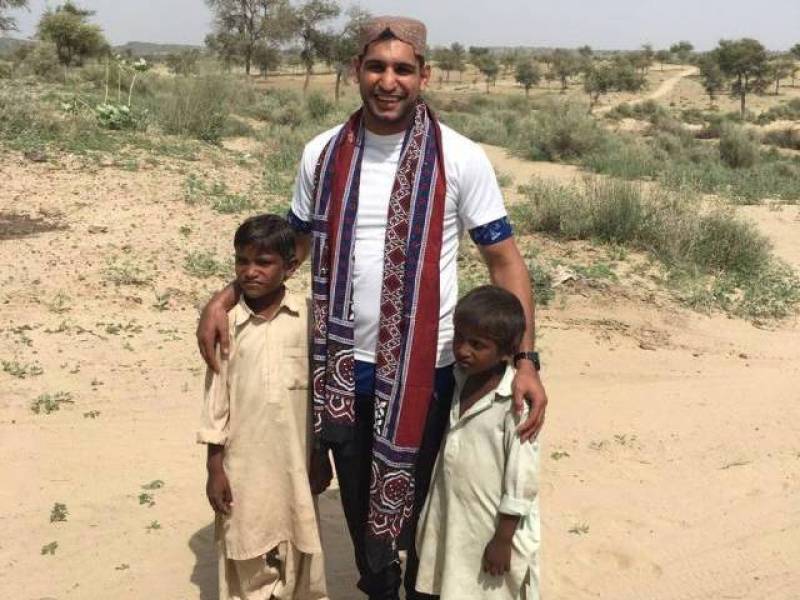 MITHI: Boxing champ Amir Khan on Thursday visited Thar along with Pakistan Army officials where he announced the construction of a hospital equipped with state-of-the-art facilities and inaugurated water and power facilities for the drought-hit region.

The UK-based boxer turned to Twitter to post pictures of his recent visit, urging people to assist with the humanitarian effort of bringing clean water to the residents of the area.

Great time at Thar Parker. Got an amazing welcoming by the locals. @AKFoundation will build water wells in the area pic.twitter.com/GyQMJse66N

The 29-year-old mixed with the locals during his tour and also thanked Pakistan Army officials for their constant support.

Big thanks to the Pakistan army COAS and @AsimBajwaISPR @Shafiqcapricon for all the help and support in Thar Parker pic.twitter.com/RK0KZAnySU

My wife @FaryalxMakhdoom getting treated so well from the women in Thar. She wants to support @AKFoundation more pic.twitter.com/DnCSI2WJwa

He added that due to the foundation’s work, nearly 800 people are able to obtain clean drinking water and he hopes to continue on this effort.

The tanks @AKFoundation built give atleast 800 people clean water. They so thankful because they normally would walk 3km.

Earlier this year, Khan held a charity event, under the aegis of the Amir Khan Trust to raise funds for drilling two wells in Thar.

The boxer’s tour went for three days with a meet-and-greet at a local mall taking place on May 31, followed by a public workout at the Frere Hall the next day.