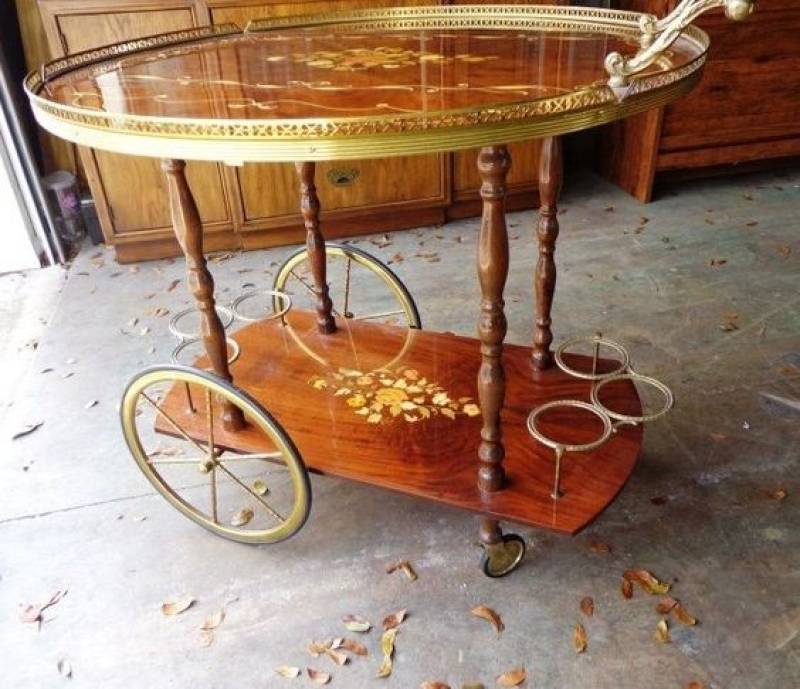 A room full of stressed air, with two families sitting opposite each other, exchanging small talk and strained smiles. In walks “the” girl with a trolley. I serve tea to all present, amidst observant eyes. I was nervous and tense but try to maintain a calm demeanour so as not to make a fool of myself. The groom’s family ask me questions, to which simple ‘yes’ and ‘no’ and ‘jee aunty’ answer suffice.

Marriages in Pakistan are traditional and follow custom handed down from generation to generation. One such tradition is that of the groom’s family going to the bride’s house to see the potential bride. The serving of the tea by the bride-to-be symbolises her obedience and domesticity. Disclaimer: do not blame the tea trolley if the bride turns out to be neither obedient nor domestic.

The tea trolley tradition was an important component of the marriage traditions. Now, however, this tradition is fast becoming obsolete. With girls asking the question like, “why should we be the once serving “chai” and not the guy”, the rolling in of trolleys is diminishing. They consider it embarrassing to be scrutinised by the other family and then rejected or accepted on the basis of one meeting over tea.

If a girl can catwalk gracefully in high heels and handle her dupatta while pouring tea that still does not make her ideal daughter-in-law material, what should matter is her knowledge about things happening around her and world issue.

However, the future in-laws assess the girl in a lot of ways. The serving etiquette, grace and posture, and speaking mannerism are all noted. This proves the myth of aunties having a mental checklist via which they gauge a girl. Appearance check; height check; weight check; spilling a drop of a tea while pouring…rejected!!!!

Supporters of the tea trolley tradition see its usefulness in getting to meet the family and the girl and seeing the family setup. But the new wave of feminism threatens to sweep this tradition away.

We are all more or less familiar with this scenario of bringing Rishtas to the bride’s house, however in all the stories we here the focus is on the girl. She was wearing this, or said that and felt this way or that way. The question then arises, what about the groom? He was also present there but rarely do people shed light on the sheer awkwardness that he has to go through.

Look at our boy, he is so shareef he does not smoke or stay out late and is so respectful of his elders, the mother starts giving a monologue about just how wonderful her son is. And the son (let’s call him Ali) is shifting is an embarrassment. Ali feels like he is for sale, and according to his mother, the number of embarrassing anecdotes is directly proportional to his price.

The other side of the story, though underplayed, is still there. The tea trolley tradition, as it is sometimes referred to, is equally disliked by both the potential bride and the groom. Ali also has to go through scrutiny from the bride’s family. He is bombarded with questions about his qualifications and job. It can be a more gruelling process than a job interview.

Therefore, before being quick to sympathies with the bride to be of the world we should also take a look at Ali and see that he is not so much of a supporter of the tea trolley tradition either. Fewer families follow the conventional way of this tradition now. These days, the girl and the guy both sit with their families and get to know each other in the comfortable environment. There is no formal entry of the bride-to-be walking the ramp to marital bliss. Or the grooming being represented as an angelic being, gift wrapped completely with the huge shiny bow.