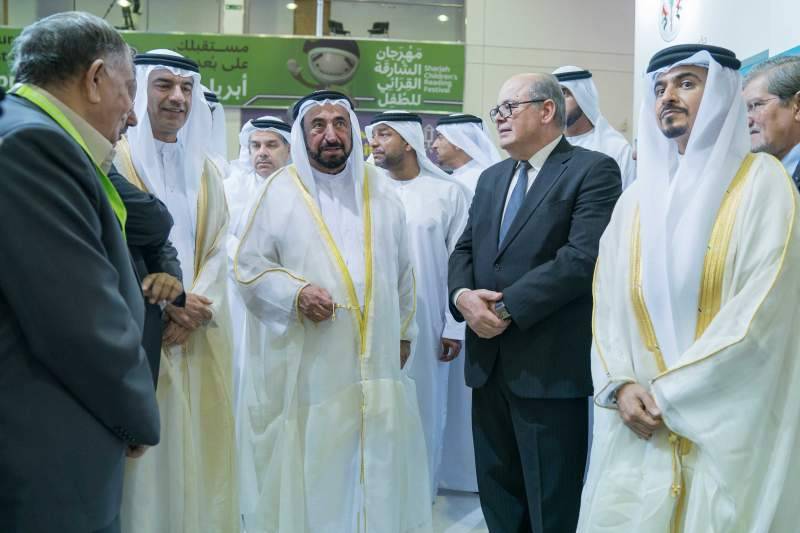 Organised by the Sharjah Book Authority (SBA), SCRF 2018 is themed ‘Your Future… Just a Book Away’, with the participation of 134 publishers from 18 Arab and foreign countries and 286 authors, poets and literary guests hailing from 121 countries.

Running from April 18-28, the event will host a line-up of 2,600 cultural and literary events and activities to enrich and entertain all ages, books and literary materials. 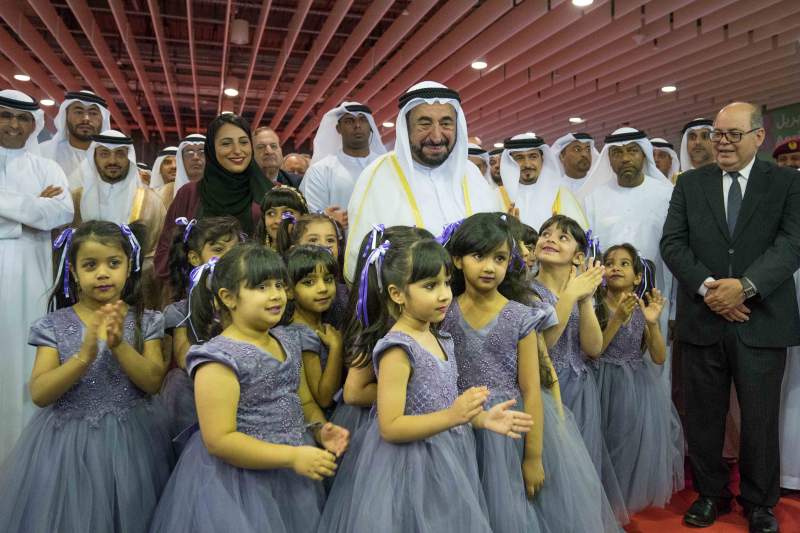 His Highness Sheikh Dr. Sultan Al Qasimi toured SCRF’s exhibition halls and the stands of a number of local, Arab and international publishing houses and organisations, where His Highness was acquainted with their publications of printed and digital books, as well as learning materials.

The Ruler of Sharjah also visited the ‘Future Machine’ exhibition, which encompasses live visual shows offering children insights into the new digital age, as well as models and replicas that run on artificial intelligence and robot functioning, allowing visitors the opportunity to explore the latest technologies.

During his tour, His Highness Sheikh Dr. Sheikh Sultan viewed the seventh edition of the Sharjah Exhibition for Children’s Books Illustrations, featuring 355 artworks by 104 illustrators from 32 countries. The UAE is topping the ranks in terms of participation, with 12 Emirati illustrators, while 29 others are from Arab countries and 67 from the rest of the world. His Highness also met some illustrators and commended their influential role in increasing children’s turnout to reading. 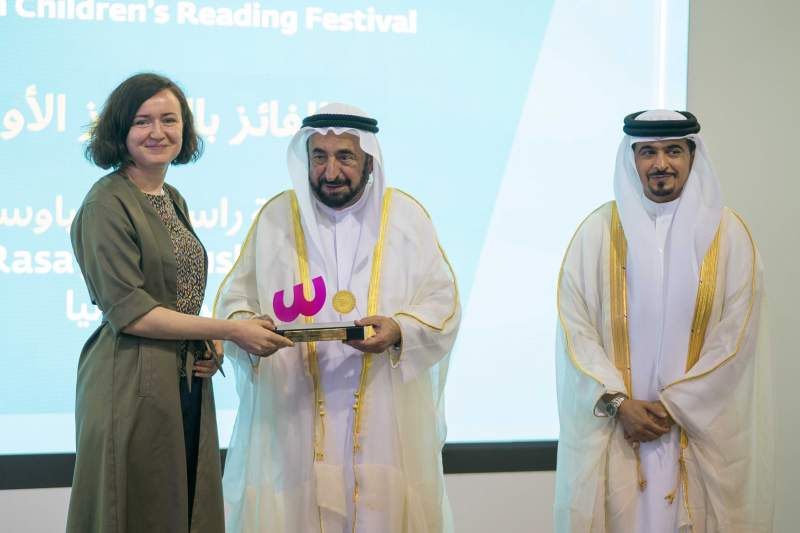 The Arabic Young Adult Book Award, which targets children aged 13 to 17 years, was given to Dr. Ibrahim Shalabi for his book 'Wasim Tours,’ while the International Children's Book Award was secured by Michelle Zilkoski.

HH Sheikh Dr. Sultan also honoured the winners of the SCRF Awards 2018, including author Nahed Al Shawwa, who won the Best Arabic Children’s Book for the age group 4 to 12 years, for her book ‘One Dream or Two’, published by Noon Books. 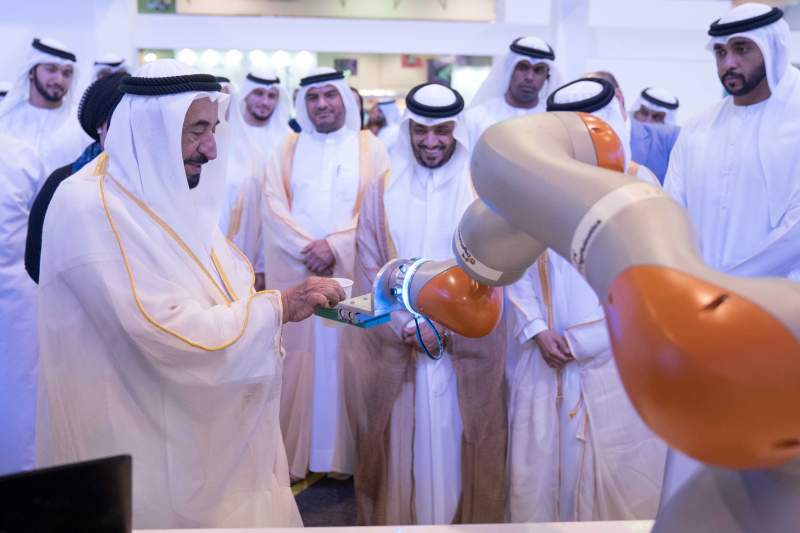 The International Children's Book Award was secured by writer Mariam Saqr Al Qasimi for her title ‘Where the Letters Disappeared?’, published by Medad Publishing and Distribution.

SCRF 2018 also features a series of international theatrical performances that combine education, fun and entertainment to highlight the values of honesty to young visitors.  Among the performances are international favourite ‘Tuta and Monkey Cheetah’, and the ‘Island of Kids’ Area’ from Kuwait. Young visitors will also be treated to a truly impressive virtual reality illusion show ‘Hara Hiroki’ from Japan.

The Social Media Café is hosting an elite group of social media influencers who focus on awareness and educational aspects.

An impressive line-up of prominent Arab literati and celebrities are taking part in this year’s SCRF, most notably renowned Egyptian actresses Sabrin, Algerian artist Tareq Al Arabi Tarkan, who wrote more than 1,000 songs and created scripts for several TV shows and famous cartoon films, and Syrian actress Amal Hawijeh, who has been the voice of much-loved animated film characters. 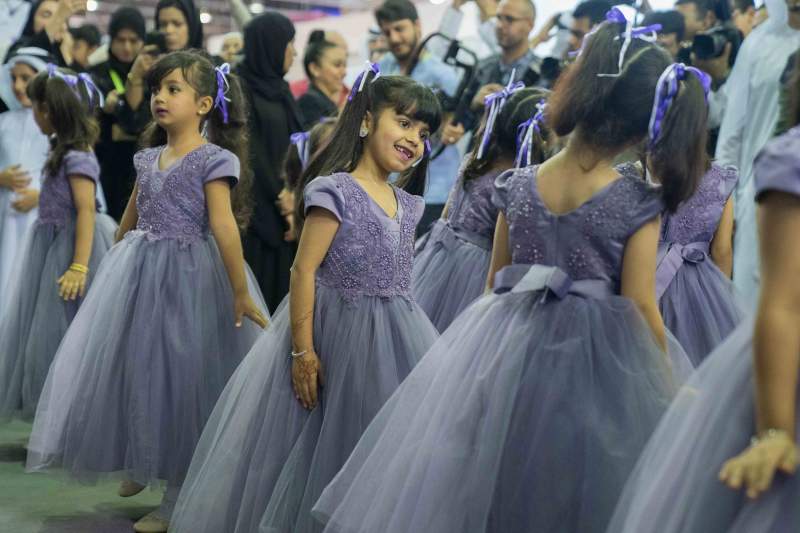 The festival, which is held annually under the patronage of His Highness the Ruler of Sharjah, and his wife, Her Highness Sheikha Jawaher bint Mohammed Al Qasimi, Chairperson of the Supreme Council of Family Affairs, has been developing the knowledge of children in the UAE, expanding their intellect and fostering their skills through its rich array of cultural, health and awareness events as well as art, entertainment shows and sporting activities.

The 10th edition of SCRF 2018 is being held in collaboration with sponsors and partners including Etisalat as the official sponsor, Sharjah Media Corporation as the media sponsor, and the Expo Centre Sharjah as the event’s strategic partner, in addition to other organisations participating in cultural and educational events.