Who is behind the recent rise of genetically modified poppy in Afghanistan? 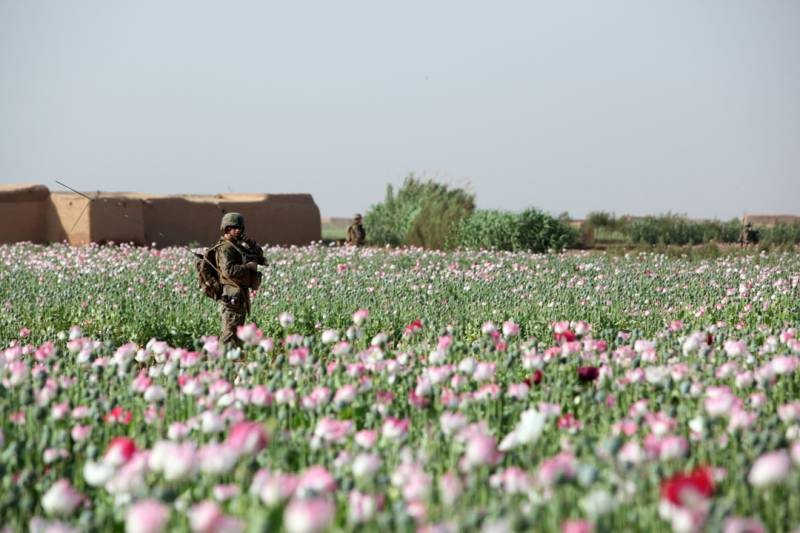 During the past two to two and half decades Afghanistan, under various regimes that controlled parts of the country, poppy has globally been highlighted as the most notorious origin of one of the world’s deadliest drugs, heroin.  As poppy, the opium plant, is one of the major sources of the production of heroin, and 80 to 90 percent of the world’s poppy is being cultivated in and harvested from Afghanistan, this dimension of the conflict which is also closely linked with farming activity and livelihoods came to the limelight first in the mid-1990s.

There is little doubt the rival Afghan warlords encouraged poppy cultivation and even direct production of heroin to be sold to the international market, to gain financial resources required for survival of their respective combatants. For poor Afghan farmers, poppy became an attractive cash crop and they turned to it in large numbers especially in the eastern and south-eastern provinces of the country. However, it is also a fact that Taliban – considering poppy cultivation un-Islamic – carried out a serious and targeted campaign against poppy cultivation and reduced its cultivation to negligible levels in areas under their control. 2001, the last year Taliban were in power, was the year with the lowest production of poppy in Afghanistan.

However, as Taliban were driven out of the corridors of power, American-backed governments were installed at the central and provincial levels and Taliban started insurgency, poppy again started to emerge as a major crop and with higher productions from 2003 onwards. The production sky-rocketed from a meagre 185 tonnes in 2001 to 3700 tonnes in 2007.

In recent years, a further upward trend and record levels of growth in poppy cultivation have been observed. A United Nations Office of Drugs and Crime (UNODC) report tells us that the area under poppy cultivation increased to over 2,00,000 hectares in 2016, and with an estimated increase of over 40% as compared to the past year, the production of poppy stood at a huge 4800 tonnes in the year.

Overall, poppy cultivation accounts for some 16% of total Afghan GDP, and this translates to around two thirds of total agricultural produce in the war-torn country. More than 235,000 people find direct jobs in this activity and some 57% household incomes in rural areas are dependent on it.

The US-led international forces, the government in Kabul and international discourse by and large say that it is the Taliban who are encouraging poppy, people are forced by Taliban to cultivate it, and the local hapless farmers have no other option but to listen to Taliban and go for this notorious crop. Nonetheless, an important dimension remains rather less highlighted in this whole discourse that some reports by independent media and research institutions had also signalled towards the involvement of elements within the international forces in this heinous trade.

In the past two to three years, a whole new development has taken place. It has been reported several times that Genetically Modified (GM) seeds of poppy plants have been distributed among the farmers in regions known for poppy cultivation. These seeds not only give two to three times more yield per hectare but due to the shorter period of time that crop of these seeds takes to mature, farmers can sow and harvest two and in some cases up to three crops of poppy in a year’s time. While the political and strategic objectives of the parties to the ongoing conflict are not part of the scope of this research, one surely would wonder whether Taliban have the ‘research and development’ expertise and resources required to develop GM seeds of such a crop? If not Taliban, the question of who is involved behind this seriously disturbing development becomes critical.

There are also indications that the government in Kabul and its functionaries at provincial and district level are hardly prepared, ill-equipped and, more important, not serious in offering the farming communities an alternative to poppy cultivation. The stakes in this anti-human trade are surely beyond Afghanistan’s boarders, and its backward and forward linkages are by no means limited to hapless rural Afghans.

Whoever has introduced genetically modified seeds of poppy in the war-ravaged country undoubtedly has some long-term plans of ‘staying in business’ in this part of the world, and it simply means that the stakes of such business are linked more closely with continuity of the conflict.