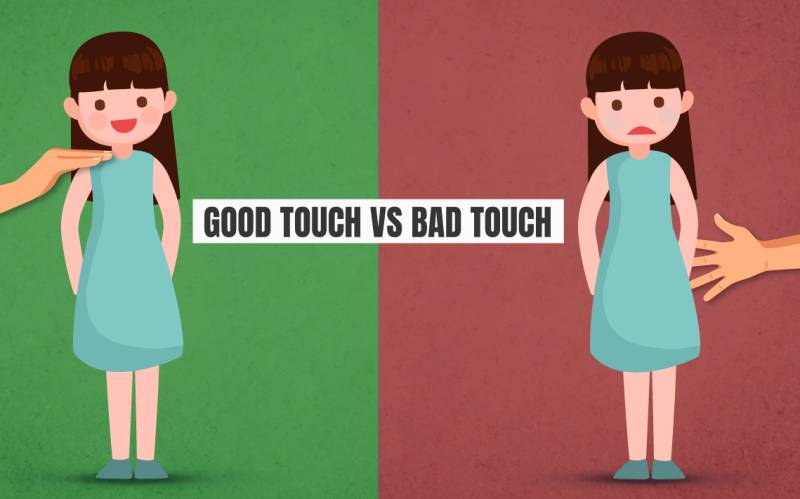 In a society where scientific names for male and female private parts remain censored in the lives of our little ones, can we as a nation save them from the dreads of child sexual abuse? In a perfect world, there would be no need to sit down and have uncomfortable conversations but in the distraught dystopia that we live in, the only way we can save our children from werewolves with friendly smiles is to teach them the concept of good touch versus bad touch; and that too, in a direct manner. Bad touch would refer to any sort of advancement that would make a child uncomfortable, nervous, or afraid.

While sexual abuse in particular is a difficult topic to discuss and would seem much easier to steer clear of, it has become a crucial need these times to prevent child sexual abuse.

In the past few years, owing to the social climb of women raising their voices against various injustices, many renowned women have come forward with their deeply personal stories of adolescent sexual abuse that have haunted them over their growing years, hindered opportunities for them, bound them to scepticism and mistrust in other people, and shaped their personalities greatly.

One such esteemed woman who took the gulp of bravery and came forward with her story was Nadia Jamil; the actress who also battled breast cancer in the past year displayed courage as she opened up about her story of how she was sexually abused at the tender age of 4 and then at 11 and even when she was in college. She talked about how her abusers were her Quran teacher, her driver and someone she had known in the family-friend circle.

Over the years, depression, sadness, shame and fear became her companions and the reason she came out with this story was not only to empower several others and let them know that they had nothing to be ashamed of but to also warn against the perils of child sexual abuse in our community.

But the wiser have always said, it is better to be safe than sorry and that is why the darkness that has overtaken our society, we must protect our children in the best of ways. But when the words, ‘child’, ‘sexual’, and ‘abuse’ fall together in one sentence, we don’t know how to help save our youth.

Among many ways that can help teach a child about sexual abuse and bad touch, the first step is to help them familiarize themselves with their body parts and their biological names. In that way, they would have developed better capabilities in sharing their experiences with their parents or trustworthy guardians. We need to teach them how to take ownership of their bodies and no one is allowed to touch them. Doing so will help them preserve the privacy of their body parts. This would allow them to learn that some parts of their bodies aren’t supposed to be seen, touched, or photographed by people. A good way to do this is to take the help of the swimsuit rule i.e., body parts that are covered with a swimsuit are their private parts. Any exceptions that may deter the rule is if the child is being examined by his or her mother or a doctor in the presence of a parent or guardian.

When you start talking to children about their bodies from an early age, helping them learn the names of their private and non-private parts, they find it easier to have an open and candid conversation regarding anything or anyone that may be trying to cross their physical boundaries. Discussing body anatomies or processes during bath time may be a good way to help children learn.

As a parent or guardian, we must make sure that your child is not keeping any secrets from you. Try and be your child’s best friend as a parent, and let them know that you will protect them at any cost and that they can have total confidence in you while discussing their issues. In most cases, children fear that their parents might not believe them in incidents of sexual abuse, which is why they fail to express their problems and become silent victims of years of abuse.

It is excruciatingly important to explain to a child why a certain thing must be done to keep them safe. For example, getting treated by a doctor, or being examined by a parent in terms of their health. Teach a child how to react and what to say when a stranger or even a close relative suggests or performs sexually or abusively towards them. They should be taught to scream ‘NO’ or run away to a safe person immediately in such cases. Children should be able to ask for help and should be listened to in such cases.

Lastly, to save your child and yourself from the pain and woes of child sexual abuse, please observe them around other people or adults. The danger posed by strangers isn’t the only thing your child should be alert against. Sometimes, the worst predators can be the ones you trust the most and are in close relation to you and your child. If a child does not want to meet or hug a certain person, don’t force them. Let them take control of their personal space and let them trust you in their difficult times.

These are some ways to get you and your child on the right track regarding sexual and physical safety and create a healthier environment for your child to grow up in.

Ayesha Khalid has a degree in finance from the Lahore School of Economics (LSE) and dabbles in writing literary pieces for her Instagram blog (@lilacsnliterature). She can be reached via email at ayesha.khalid101@icloud.com.

Use electricity wisely, for your own safety!

Pakistan and Pedophilia: Disempowering the Child Predators in Pakistan

Born This Way: Not MY Fault

Peace education at schools: the only way forward

Child Labor in Pakistan: What Imran Khan must do?