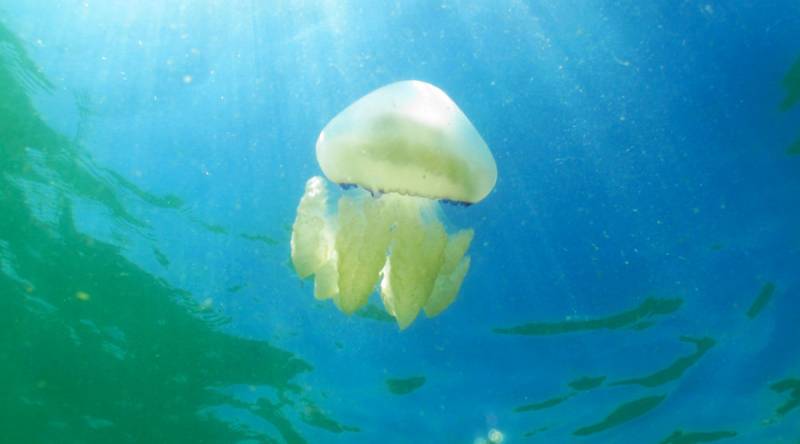 LONDON (Web Desk) - Deadly Portuguese jellyfish, with tentacles as long as five London buses, have been sighted around the English coastline amid fears of invasion among conservationists.

The species usually lives far out in the ocean, but experts from the Marine Conservation Society (MCS) say that the Society’s survey team has received many more reports of them near the shoreline this year.

The venomous jellyfish, which can reach 160 feet in length, can be deadly. Surfers and swimmers are not always able to spot the creatures before they are stung.

Last month, there were 30 reports from locals in the southern English counties of Devon and Cornwall of the jellyfish drifting near the coast.

“The million-dollar question is why this is happening? At the moment we just don’t know,” he said.

In 2013 there were 1,000 reports involving hundreds of thousands of jellyfish in England, he added.

“Last year the number of reports increased again to over 1,400 reports, and by July this year the survey had already received over 1,000 reports.”

“August is usually a peak month for jellyfish sightings and so 2015 look set to be another record breaker.”

Ferdinando Boero, a lecturer of marine biology at the University of Lecce, told the Daily Mail that sightings of this type of jellyfish are increasing “due to global warming.”

The first person to ever die as a result of the jellyfish’s sting in Europe was reported in the Mediterranean in 2010.

Maria Furcas, 69, suffered an allergic reaction after being stung on the right leg while she swam with her sister at Porto Tramatzu near Cagliari, Sardinia.

The creature’s venomous tentacles can deliver a painful sting, similar to a cut with a knife, with rash-like symptoms developing immediately. However, the pain depends on the level of exposure.

British doctors warn victims should seek urgent advice if they are stung by any kind of jellyfish.

A spokeswoman for Brixham coastguard in Devon said: “Normally it depends on the age of the person who has been stung whether or not they require medical attention.”

Very young or elderly people are at high risk of dying after being stung, they said.

The Marine Conservation Society said the rise in the number of jellyfish around the British coast can “no longer be ignored.”