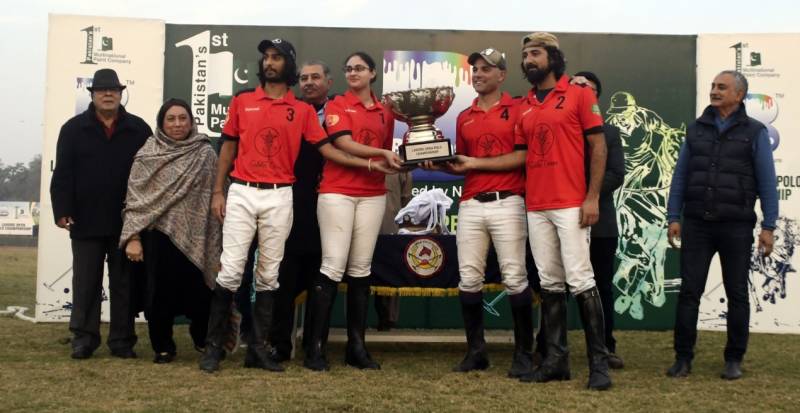 Both the teams fought hard till the end and when the final whistle was blown at the end of the fourth chukker, the score was draw at 5-5. The match was then decided in the sudden death chukker, where Ernesto Trotz smashed in the match-winning goal to help Barry’s/BN 2 clinch coveted Lahore Open Polo trophy.

Ernesto Oscar Trotz was the hero of the final as he played superb polo with quality horse and mallet work and fired in fabulous four goals from the winning side while Hamza Mawaz Khan and Babar Naseem hit one goal each. From Remounts, ALD (R) Imran Shahid slammed in two goals while SWR (R) Naeem, Raja Temur Nadeem and Babar Naseem scored one goal each.

The concluding ceremony of the tournament was graced by Bright Paints Director Khawaja Bilal Ahmad Sikka as chief guest, who distributed prizes among the winners and top performers. ALD (R) Imran Shahid was declared as the best player of the main final while Raja Sami Ullah scored maximum goals in the tournament and the best pony of the final was Ferabuta of Team Barry’s/BN 2.

Earlier in the subsidiary final, Diamond Paints/Sheikhoo Steel defeated Coca Cola Polo Team by a narrow margin of 7-6. Surprisingly, the subsidiary final was also decided in the sudden death chukker. From the winning team, Andres Llorente was top scorer with three goals while Saqib Khan Khakwani banged in a brace and Mir Huzaifa Ahmed and Osman Aziz Anwar struck one each. From the losing side, Tomas Reinoso cracked a quartet while Waqas Khan and Abbas Mukhtar scored one goal apiece.