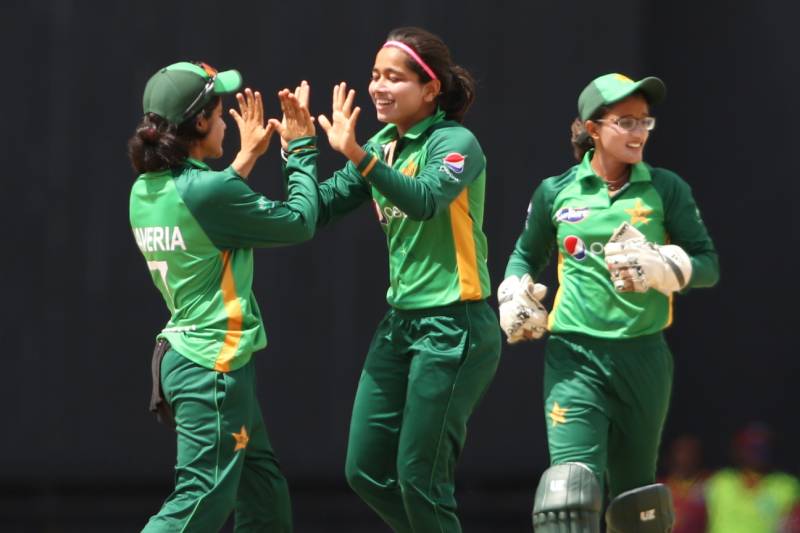 ANTIGUA – The 19-year-old right-arm pacer of the Pakistan Women team, Fatima Sana took nine wickets in the last two ODIs of the series, leading Green Shirts to end the tour of the West Indies on a high note.

The overall performance from young Fatima helped Pakistan to bag their second consecutive win as they defeated the hosts by 22 runs.

The visitors were sent in to bat first after losing the toss, while Muneeba Ali (39) and Sidra Ameen (13) went straight to work, building a 40-run stand to kick-start their innings.

Later, Fatima Sana struck an unbeaten 28 off 19 balls, including four boundaries, to bring a total of 190/8. WI captain Deandra Dottin took to the task well, before being sent to the pavilion by Sana (5/38) in the 15th over.

Fatima took five wickets for just 39 runs from seven overs as team Green defended 194 in 34 overs in a rain-curtailed match. The 19-year-old accounted for the scalps of well-settled batters who scored the most runs in the innings for the hosts. It is a record of the best ODI hauls by a Pakistani player in nearly eight years.

Fatima Sana is player of the match as Pakistan beat West Indies by 22 runs.

Speaking about the applauding achievement, the young star said “It was the happiest day of my life when I wore the Pakistan shirt in 2019, but I knew I needed to cement my place in the team by making contributions that lead my country to victories.”

She further added: "A lot of the credit goes to the coaching staff, who give us all they have behind the scenes and work with us around the clock to help us improve as cricketers. That I have seniors in Javeria Khan and a new ball partner in Diana Baig has also helped me a great deal.”

The young achiever is also a recipient of the PCB Women’s Emerging Cricketer of the Year 2020 award, finished the series with 11 wickets.

Meanwhile, the West Indies Women bagged the series after clinching the first three matches of the five-match series.