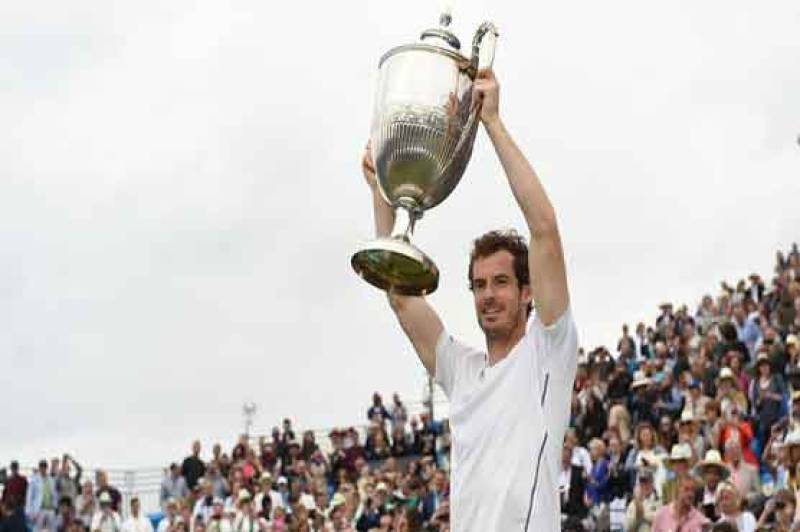 LONDON (APP) - Andy Murray made history at Queen's Club as the defending champion fought back to win the Wimbledon warm-up event for a record fifth time with a 6-7 (5/7), 6-4, 6-3 victory over Milos Raonic on Sunday.

Murray was on the ropes for a set and a half in west London, but the world number two staged a gritty fightback to surpass a group of eight four-time Queen's champions including John McEnroe, Boris Becker, Andy Roddick and Lleyton Hewitt.

The 29-year-old survived a barrage of 14 aces from Raonic to finally subdue the Canadian fifth seed in two hours and 13 minutes, in the process becoming the first player to successfully defend the title since Roddick in 2005.

He recovered from 3-0 down in the second set and now has a remarkable 30-5 match record on the grass at Queen's, a venue that has remained close to the Scot's heart since he secured the first ATP Tour match win of his career against Santiago Ventura in 2005.

It was Murray's 37th career ATP title and his second of 2016 as the former Wimbledon champion erased the bitter taste of French Open final defeat against Novak Djokovic two weeks ago.

Despite picking up the oversized trophy, a cheque for #322,126 ($460,000, 410,000 euros) and 500 ranking points, the most significant prize of the week for Murray is the knowledge he is in peak form ahead of his bid to dethrone Djokovic at Wimbledon, which gets under way on June 27.

Murray's success maintained his 100 percent record in Queen's finals in the week he reunited with coach Ivan Lendl, who will have relished getting the better of old rival McEnroe in his new role as Raonic's coach.