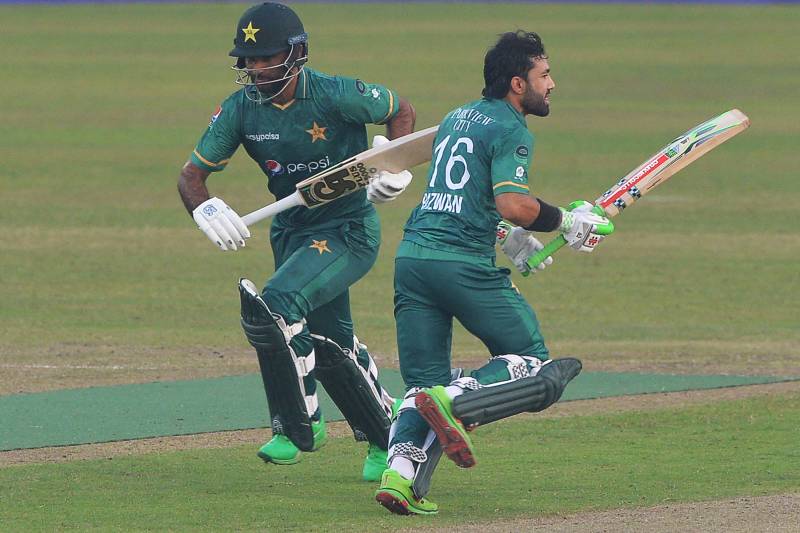 DHAKA – Pakistan take an unassailable 2-0 lead in the T20I series against Bangladesh by winning the second match at Dhaka National Stadium on Saturday.

Pakistani skipper Babar Azam bowled after scoring 1 run in the second T20 match Saturday, while Bangladesh also failed to impress in their innings against the strong bowling line-up of Pakistan, managing only 108/7.

Opening batsman Rizwan along with Fakhar Zaman is playing steadily for team green on course to win the second game of the three-match series.

The duo played their shots to perfection so far. Zaman (13*) and Mohammad Rizwan (18).

After deciding to bat first in a back-to-back T20I, Bangladesh lost their openers for just five runs. Najmul Hussain Shanto and Afif Hossian supported the home side’s sinking ship and scored 47 runs together to take them to 51-2 in eight overs.

Young talent Najmul Hossain Shanto scored the most runs for the Tigers, 40 off 34 balls, while Pakistani pacer Shaheen Shah Afridi and Shadab Khan took two wickets each to deal frequent blows to the hosts.

Mohammad Wasim also dismissed left-handed Bangladeshi opener Naim, who was caught at slip, and new addition Nawaz, and star player Haris Rauf also pitched in with one wicket each.

Pakistan earlier lost the toss and was put in to bat by the hosts as the two sides lock horns in the second T20I of the series.

Babar-led squad, already 1-0 up in the T20 series against Bangladesh, will be eyeing a series victory today at the Shere Bangla Stadium in Dhaka.

Bangladesh on Saturday won the toss for the second time and elected to bat first in the second T20 International against Pakistan being played in Dhaka.

Bangladesh have opted to bat in the second #BANvPAK T20I 🏏

Can they level the series today? pic.twitter.com/5c5UmTNetw

The fixture will start at 1 pm at the Sher-e-Bangla Cricket Stadium today. The Tigers lost the first game but that was not too without a fight.

Babar-led squad is looking confident to continue the momentum from the start of the tournament where a large number of cricket fans flocked to watch their favorite players.

Despite the failure of the top batsman, the middle and lower order put their hands up to give Shaheens a 1-0 lead in the limited over series. Meanwhile, Bangladesh wanted to break the jinx of consecutive six defeats including five from the T20 World Cup.

Pakistan beat Bangladesh by 4 wickets in the first #BANvPAK T20I

The Tigers, with several new faces, put up a tremendous fight but will be ruing the missed opportunity having had Pakistan's backs against the walls at 24/4 chasing 128.

The hosts' bowling side performed well in yesterday’s match, but the batters crumbled without much resistance and the team might do some changes to strengthen a batting order on a good batting surface.

Skipper Babar Azam, after the first win, said the wicket was a bit difficult, not easy to bat on. Fakhar, Khushdil, and how Nawaz finished. We could have bowled them earlier, we ended up conceding 15-20 runs extra but that happens in cricket.

DHAKA – Pakistan on Friday achieved a four-wicket win over Bangladesh in the first T20I of the series played in ...

LAHORE – Pakistani pacer Hassan Ali achieved another milestone on Friday as he has become the leading ...