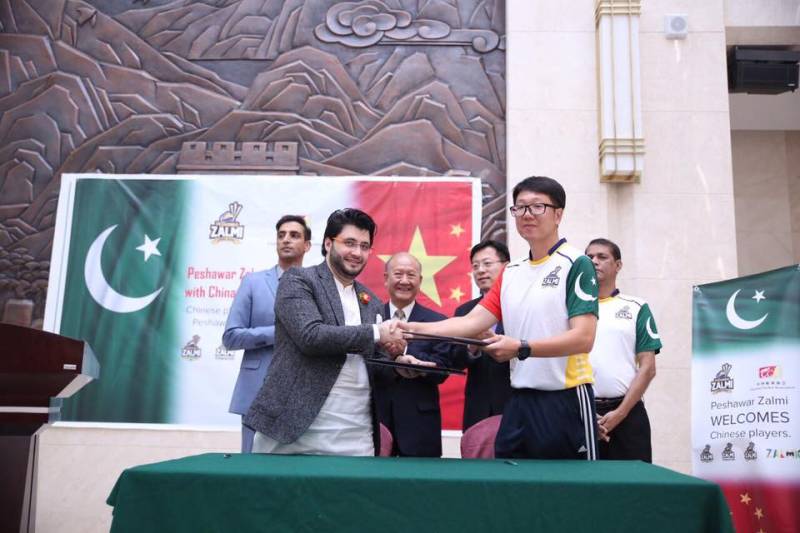 Welcoming the cricketers at the Embassy of the People’s Republic of China, the Chairman of the Zalmi franchise, Javed Afridi, said that China and Pakistan’s collaboration encompassed more than infrastructure, scientific research, industry and technology.

He expressed that the exchange of cultural values, as well as sport, was equally important in further reinforcing the bond between our two nations.

'Peshawar Zalmi is not only pleased to assist in top-notch coaching and mentoring of cricketers in China but also providing them with a platform to recognize their talent and motivate them to achieve international recognition' said Javed Afridi.

The prestigious occasion was graced by Former Chinese Ambassador to Pakistan Chun Xiang Zhang who expressed his confidence that this initiative would promote the sport of cricket in China.

The two Chinese cricketers Jian Li and Yufie Zhang who would showcase their skills in PSL 3 attended the event along with China’s cricket team coaches Rashid Khan and Yi Tian.

Moreover, Shah Faisal Afridi and Shah Khalid Afridi also showed up at the event where the Director of Cricketing Affairs at Peshawar Zalmi, Muhammad Akram laid out Peshawar Zalmi’s plans to invigorate cricket in China.

As part of its expansion plans, the Peshawar Zalmi coaching team will travel to China for a seminar to kickoff the collaboration and hold coaching programs subsequently to identify and groom young Chinese talent.

Moreover, China Zalmi, will take part in tournaments organized by the Zalmi franchise under the initiative of Global Zalmi, a fan-based league of cricket enthusiasts with representative Zalmi clubs in over 25 countries around the world.

Let it be known that Peshawar Zalmi hired the services of renowned medical practitioner Dr Zafar Iqbal as its medical adviser for upcoming events, last week.