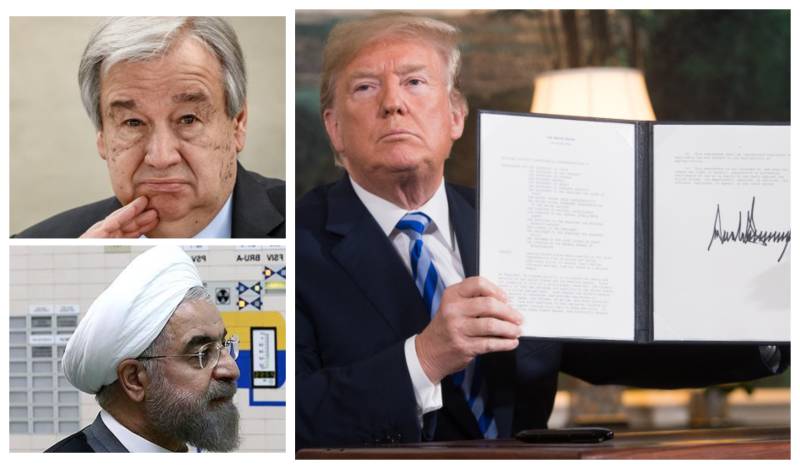 UNITED NATIONS – United Nations Secretary-General Antonio Guterres has expressed his inability to take any action on a US declaration that all UN sanctions have been reinstated against Iran because of an apparent "uncertainty" on the issue, according to a media report.

US Secretary of State Mike Pompeo said Saturday that all UN sanctions against Iran were "back in effect" under a "snapback" mechanism featured in the 2015 nuclear deal between Iran and world powers.

"There would appear to be uncertainty whether or not the process ... was indeed initiated and concomitantly whether or not the (sanctions) terminations ... continue in effect," Guterres wrote in a letter to the UN Security Council, according to Reuters news agency.

In his statement, Pompeo also warned UN member states with "consequences" if they refused to implement the sanctions.

"If UN member states fail to fulfill their obligations to implement these sanctions, the United States is prepared to use our domestic authorities to impose consequences for those failures and ensure that Iran does not reap the benefits of UN-prohibited activity," he said.

The top US diplomat "notified" the UN Secretariat last month that Washington was triggering the mechanism.

However, other signatories to the nuclear accord assert that the American procedure lacks legal effect because Washington left the deal, officially known as the Joint Comprehensive Plan of Action (JCPOA), in 2018.

"It is not for the Secretary-General to proceed as if no such uncertainty exists," the UN chief added to his remarks that coincided with the deadline set by Washington.

Thirteen of the 15 Security Council members say Washington's move is void because Pompeo used a mechanism agreed under a 2015 nuclear deal between Iran and world powers, which the United States quit in 2018.

Guterres said that "pending clarification" of the status of the Iran sanctions, he would not take any action to provide that support.

NEW YORK – After the United Arab Emirates, the Kingdom of Bahrain has agreed to the establishment of full ...

President Hassan Rouhani said that the United States has failed in its pursuit of restoring international sanctions on Iran, which marks a victory of the Iranian diplomacy.

According to the Iranian president, the US has been trying to assemble an anti-Iranian coalition ever since it withdrew from the JCPOA in 2018 as well as to provoke Tehran to undertake actions that would give Washington legit grounds to restore the sanctions.

"Fortunately, the US encountered failure and negative reactions by the international community, even its traditional allies, at absolutely every stage of this period," Rouhani said.

The Iranian president even threw in a pun, saying that Washington's policy of "maximum pressure" on Iran has lead to its own "maximum isolation."

Rouhani said that the US' expectation of unconditional support from the UN Security Council has failed it, going on to thank Russia and China, in particular, for their support amid Washington's pressure.

The Iranian leader vowed readiness to counter what he described Washington's "banditry" as well as pledged Tehran's readiness to return to fully implementing obligations under the 2015 nuclear deal once all other signatories do the same.

US' illegal & false “deadline" has come and gone.

UNSC member states continue to maintain US is NOT a JCPOA participant, so its claim of “snapback" is null & void.

US is STILL in violation of JCPOA and Res 2231—swimming against int'l currents will only bring it more isolation.

Russia's Deputy UN Ambassador Dmitry Polyanskiy said on Twitter, "We all clearly said in August that US claims to trigger snapback are illegitimate. Is Washington deaf?"In August, the Security Council rejected a US-drafted resolution seeking to prevent an arms embargo on the Islamic Republic from expiring in October under the JCPOA.

China and Russia strongly opposed the resolution and eleven countries withheld their votes on the draft that was only backed by the Dominican Republic.

The JCPOA was signed in 2015 by Iran, China, France, Germany, Russia, the United Kingdom, the United States and the European Union, stipulating the removal of international sanctions from Tehran in exchange for it scaling down its nuclear program. The deal was then enshrined in UNSC Resolution 2231.

The original deal turned short-lived as the US unilaterally withdrew in 2018 and re-imposed sanctions on Iran to which the latter responded by gradually abandoning its own commitments.

Earlier this year, the US tried to campaign for the restoration of international sanctions on Iran, specifically an extension to arms embargo, but all of its draft resolutions ended up rejected.