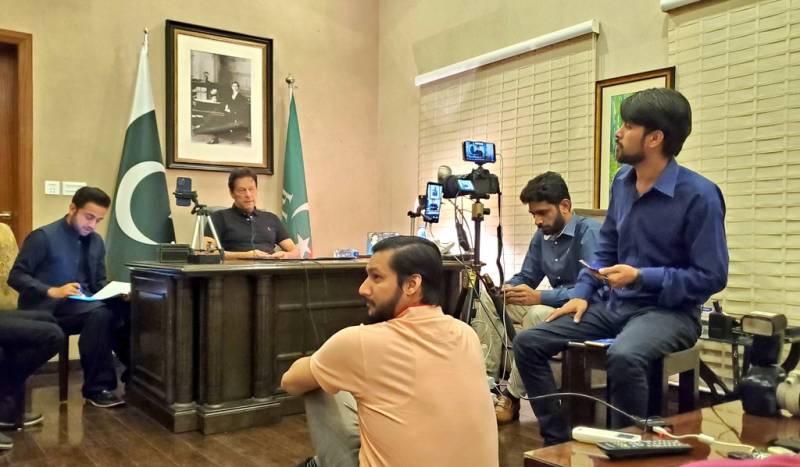 ISLAMABAD – Pakistan Tehreek-e-Insaf (PTI) has once again emerged as a trendsetter as it become the first political party to host a record-breaking live session on Twitter on Wednesday night.

PTI leader Dr Arslan Khalid said that half a million people from across the world tuned in during former prime minister Imran Khan’s first-ever audio session on Twitter Spaces where he touched upon various topics and gave answers to questions made by public.

Khalid added that average number of listeners at one time was 162,000.

Massive and record breaking response on today's live session. First ever @TwitterSpaces experience with such huge nos, few areas of improvement noted for future ones. A max of 162k listeners at one time while 500k tuned in during the one hr session.#امپورٹڈ_حکومت_نامنظور pic.twitter.com/AZ1fJTnddz

Imran Ghazali, the digital media head of the party, also celebrated the occasion on Twitter. He wrote: “What a moment, Imran Khan's space session breaks the internet in Pakistan”.

What a moment, Imran Khan's space session breaks the internet in Pakistan.

Congratulations to @arslankhalid_m, @agentjay2009 and @MoizUrRehman_ for hosting it, what an honor, #PTISMT is always ahead of the game, keeps innovating!

So lucky to be part of IK's team.

When a PTI supporter asked about threats to Mr Khan’s life in Lahore rally, being held today, the former premier said that he will attend the gathering at Minar-e-Pakistan no matters what.

“We are going to launch our fight for freedom from the place where a resolution for separate homeland was passed years ago,” he said.

I loved that in last night's space how everyone was worried about Imran Khan, like constantly asking him if he’s personally okay, asking him to take safety measures and reassuring him that we won’t leave him. My heart is so happy and relieved and proud .❤️#امپورٹڈ_حکومت_نامنظور pic.twitter.com/J5RzwAQ9mA

During the historic online session, he urged supporters to not speak against armed forces of Pakistan.

“We cannot survive without our army,” he said, adding that the army is more necessary for Pakistan than Imran Khan.