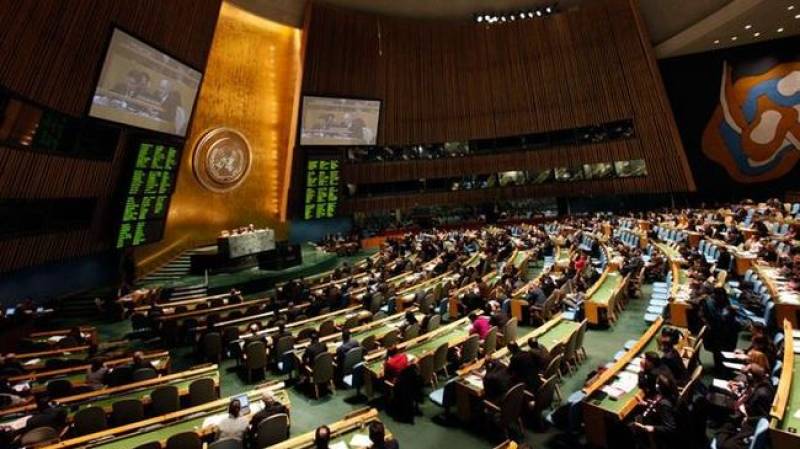 NEW YORK - The United Nations General Assembly is going to hold an emergency session today (Thursday) to vote on a resolution against US President Donald Trump's controversial decision to accept Jerusalem as the capital of Israel.

The meeting has been requested by Turkey and Yemen on behalf of the Arab group of countries and the Organisation of Islamic Cooperation (OIC), while the resolution is being co-sponsored by Pakistan.

The emergency session has been called after the United States vetoed the Egypt-backed resolution at the UN Security Council (UNSC) on Monday where all other 14 members voted in favour of the resolution.

Pakistan's permanent representative to the UN. Maleeha Lodhi has reiterated Pakistan's support to the Palestinian cause and to the defence of al-Quds al Sharif.

Maleeha Lodhi says #Pakistan's support to the #Palestinian cause and to the defence of al-Quds al-Sharif, has always been a core principle of its foreign policy. pic.twitter.com/eCSCoSmUB0

She further said the US measures regarding Jerusalem undermines the international legal system and further adds fuel to the fire in already distablised region.

It is to mention here that Israel occupied the eastern part of the city during the Middle East war in 1967 to become it the undivided capital of the illegal state.

President Donald Trump has threatened to cut aid to UN member states who vote against the US at the upcoming UN General Assembly on the issue of Washington’s Jerusalem move. He said the US will save “billions” in the process.

The president’s comments come after Nikki Haley, US ambassador to the UN, sent threatening letters to UN member states urging them to vote against the motion.

Haley also said on Twitter that “the US will be taking names” of countries that vote in favour of the resolution.

She tweeted as "At the UN we're always asked to do more & give more. So, when we make a decision, at the will of the American ppl, abt where to locate OUR embassy, we don't expect those we've helped to target us. On Thurs there'll be a vote criticizing our choice. The US will be taking names".

Trump declared Jerusalem to be Israel’s capital on December 6 and announced the US intention to move its embassy to the city.

The contentious move prompted large-scale protests and condemnation from leaders around the world.

On Tuesday, the US vetoed an Egyptian-sponsored UN Security Council resolution that called on countries not to establish diplomatic missions in Jerusalem.

The US was outnumbered 14 to 1 when it vetoed that resolution.

“The member states of the General Assembly will be asked to vote on the same draft resolution that we presented to the Security Council, which the US has blocked with the veto,” Riyad al-Maliki, Foreign Minister of the Palestinian Authority (PA), said in a statement on Monday.

On December 13, leaders of Islamic countries called for East Jerusalem to be recognized as the capital of Palestine, stating that Donald Trump’s move last week voided any US right to be a mediator of the Palestinian-Israeli peace process.

In a draft communique distributed to reporters, the 57-member Organization of Islamic Cooperation said the US decision was "null and void legally" and is considered an attack on the rights of the Palestinians.