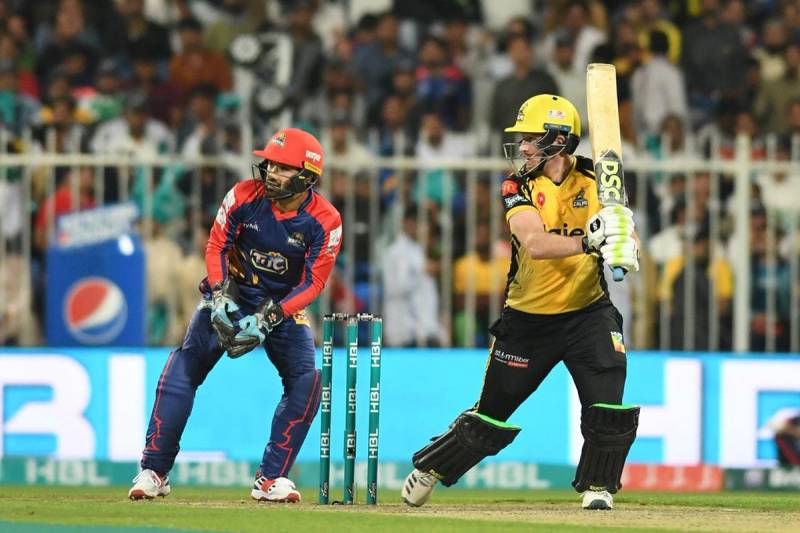 SHARJAH – Peshawar Zalmi defeated Karachi Kings by a heavy margin of 44 runs in the 9th encounter of Pakistan Super League season 4, on Thursday

Batting first, Zalmi set a reasonable target of 154 runs against Kings who had won the toss at the Sharjah Cricket Stadium.

Imam ul Haq scored a decent half-century and contributed 56 to the total on 43 balls while Liam Dawson managed to bag 43 runs on 33 balls; Zalmi lost eight wickets in its innings to pull off 153 runs against Kings.

Chasing the target, Karachi Kings failed to maintain the required run rate and the team managed to score mere 109 runs for the loss of 9 wickets.

ZALMI ZALMI ZALMI! ⚡@KarachiKingsARY completely swept away by the #YellowStorm. An amazing all round performance from the team. After a shaky start, @PeshawarZalmi came on top. So proud of the boys. ⚡#YellowStorm #WarkaDang pic.twitter.com/8ddtPCdGbi

This was the third match in the event for the two teams as both have already played two matches each in Dubai last week.

Zalmi have won two contests in the tournaments so far while Karachi Kings have suffered defeat in same amount of encounters.

Karachi Kings won their first match of the PSL 4th edition 2019 against Multan Sultans and have impressed their viewers. But they lost their second match against Lahore Qalandars. The team has prolific scorers like Babar Azam and Liam Livingstone, etc. The fans of Mohammad Amir are again expecting that he will show the best performance as he has shown against Multan Sultans.