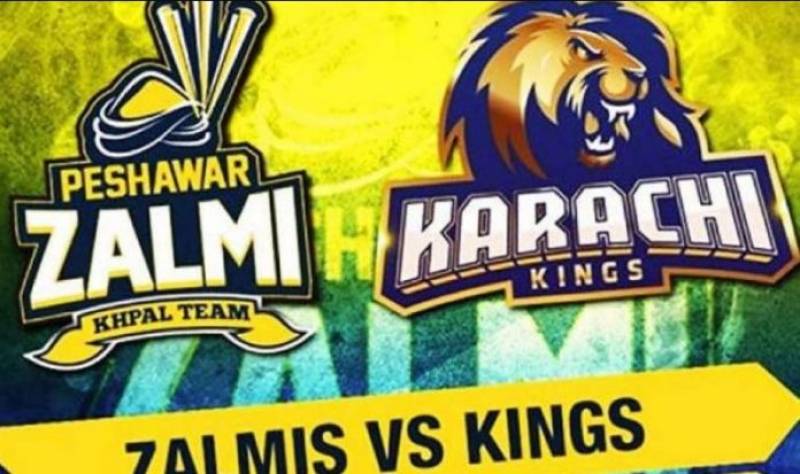 Peshawar Zalmi had chose to bowl first after winning the toss and was given the target of 202 runs to win by the Karachi Kings.

Karachi Kings’ first wicket fell when Sharjeel Khan scored 19 runs off 11 balls with one boundary and two sixes and was catch out. Cameron’s individual score was 20 runs who was clean bowled on Muhammad Mohsin’s ball. After that, Captain Imad Wasim started his innings, but unfortunately when the overall score reached 170 runs Babar Azam returned to the pavilion after a 78-run .

He faced 56 balls in his innings and struck out seven fours and two sixes. The fourth wicket of Karachi Kings fell to 180 runs. Imad Wasim scored 50 off 30 balls with 3 fours and 3 sixes. Karachi Kings scored 201 runs in the stipulated overs at loss of four wickets. Zalmi’s Hassan Ali took two wickets and Muhammad Mohsin took one wicket.

In reply, Peshawar Zalmi started its innings fast and scored 29 runs in the opening 3.2 overs. Opener Tom Banton scored 13 runs after being LBW. After that, batsman Haider Ali was clean bowled by Jordan for only 4 runs. Shoaib Malik, who came in for the fourth spot, failed to perform well and scored 16 runs.

Kamran Akmal, who came for the opening performed well added 43 runs to the scoreboard of the team but he was clean bowled by Cameron. Dawson was present on the wicket but unfortunately he was also catch-out on 22 runs by Muhammad Rizwan on Muhammad Amir’s ball. Incoming Lime Livingstone supported the team on the occasion and brought the overall score to 190 runs with partnership of Captain Darren Sammy.

Zalmi needed 12 runs to win the match over the last three balls but on that occasion Darren Sammy made 30 runs. Wahab Riaz was also catch-out by Muhammad Rizwan on the ball of Umaid Asif and thus the Karachi Kings won by 10 runs.

Jordan and Umaid Asif took two wickets each while Mohammad Amir and Delport took one wicket each.