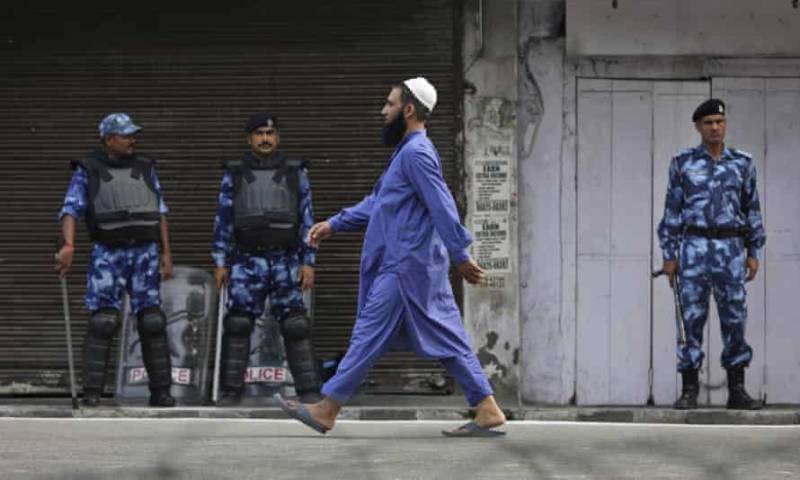 In a statement on Wednesday, the Foreign Office saying the Indian officials showed "complete disrespect and deep-rooted prejudice" against Muslims.

"Imposition of restrictions on prayers and religious festivities on one of the most important days of Islamic calendar represents complete disrespect and deep-rooted prejudice by the Indian government for the sentiments of the Muslims of [occupied Kashmir]," the FO said, adding that it was also a flagrant violation of their right to freedom of religion.

People in the held-Valley could not offer Eid prayers at major mosques on Eid al-Adha due to continued military siege and restrictions imposed by the authorities, according to Kashmir Media Service.

The occupational forces restricted people from offering in historical Jamia Masjid, Dargah Hazratbal, Eidgah and other big mosques in the territory. All the mosques and the shrines including Kashmir’s largest mosque, Jamia Masjid Srinagar, were closed. Kashmiri Muslims were also unable to sacrifice bovines freely in the territory, the KMS report added.

No such restrictions were witnessed in the valley in the past before August 5, 2019, when Modi regime revoked Kashmir’s special status.

In its statement, the Pakistan's foreign office urged the international community, United Nations, and other human rights organisations to take notice of the "brutal suppression of the religious rights and freedoms of the Kashmiri people in violation of international laws and conventions".

It stressed that India could not "break the will of the Kashmiris and suppress their aspirations for freedom from illegal Indian occupation" through such measures.

"Pakistan reiterates its support of Kashmiri people for their inalienable right to self-determination as enshrined in the relevant UN Security Council resolutions," the FO concluded.

Last week, the Indian government had ordered authorities in occupied Kashmir to ban the slaughter of all animals in the Muslim-majority region for Eidul Azha.

A government communication addressed to civil and police authorities in the region on Thursday asked them to stop “illegal killing/sacrifices of cows/calves, camels & other animals”, citing animal welfare laws.

A day later, however, authorities said there was no ban on the sacrifice of animals, with a senior government official saying the earlier communication was “misconstrued”, and the government had been seeking proper transportation of animals and the prevention of cruelty during the festival.

SRINAGAR - Authorities in Indian Illegally Occupied Kashmir on Friday denied there was any ban on the sacrifice of ...

Meanhile, the Concerned Citizens’ Group (CCG) of India which recently visited Indian Illegally Occupied Jammu and Kashmir has said that political parties in the Valley do not trust the ongoing delimitation process and want full statehood.

The group said though most political parties have agreed to participate in the delimitation process, they suspected the fairness of the process.

India's largest opposition party, Congress described the exercise as meaningless without the restoration of full statehood.

The Communist Party of India (Marxist), one of the national parties of the South Asian country, termed the Commission as unconstitutional since there was a freeze by Parliament on reorganisation of constituencies until 2026.