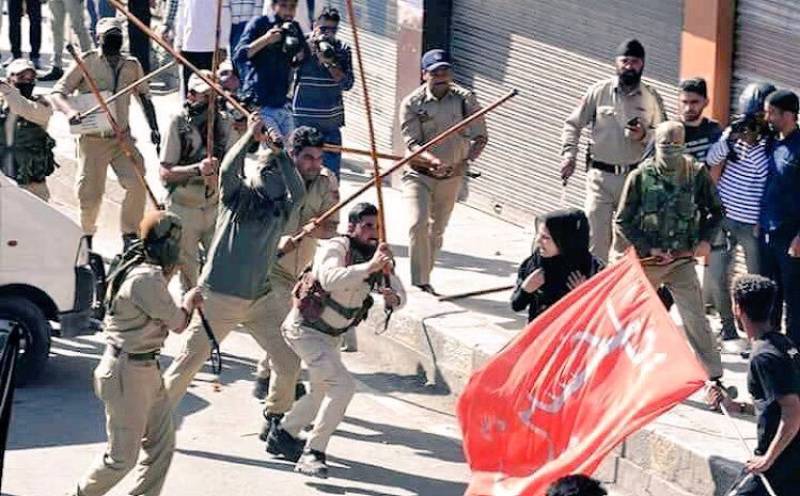 SRINAGAR - Occupational forces in their fresh acts of state terrorism shot down five young men in the Bandipora district of India-Occupied Kashmir's on Ashura, the day of martyrdom of Holy Prophet's grandson.

According to Kashmir media service, two of the men were killed yesterday while three were gunned down on Thursday in Sumlar area of the district during a cordon and search operation.

Muslims observe the 9th and 10th of Muharram, the first month of the Lunar calendar, as special days of mourning over the killing of Imam Hussain, during the battle of Karbala, Iraq in the seventh century.

Indian authorities had barred Ashura processions in Srinagar after subjecting the mourners to brute force and arresting scores of them including Hurriyat leaders who were scheduled to lead them.

On the streets of #Kashmir yesterday. Police with guns and sticks on one side and our brave sisters with the flag of '#YaHussain' on the other. Reminds one of Zainab's (sa) struggle in the aftermath of #Karbala in carrying the same flag through the streets of Kufa and Shaam. pic.twitter.com/okgXJ9Z82O

Jumma prayers also could not be held at the historic Jamia Masjid and other mosques in the city due to restrictions. The authorities had created curfew-like situation in Nowhatta, Khanyar, Safa Kadal, Maharaj Gunj, Kothibagh and Rainawari areas while deploying Indian troops and paramilitary personnel in strength across the city.

The occupying forces created difficulties for Alam, Zuljinah and Taazia processions being taken out in the valley.

Earlier, in another instance of sheer disrespect to a dead body, Indian forces dragged a body of a Kashmiri near the Kakriyal forests in the occupied valley.

SRINAGAR - In another instance of sheer disrespect to a dead body, Indian forces dragged a body of a Kashmiri near ...

A viral photo, which was reportedly captured on September 13 when the forces gunned down five Kashmiris in two separate operations, shows a group of soldiers dragging the body on a road with chains tied to its feet.

In June this year, the UN Human Rights Office highlighted serious violations committed in Jammu and Kashmir from July 2016 to April 2018. Activists estimate that up to 145 civilians were killed by security forces and up to 20 civilians killed by armed groups in the same period, it said.

Moreover, India has backtracked from conducting a dialogue with Pakistan to resolve the outstanding issues including brutalities in Indian occupied Kashmir.