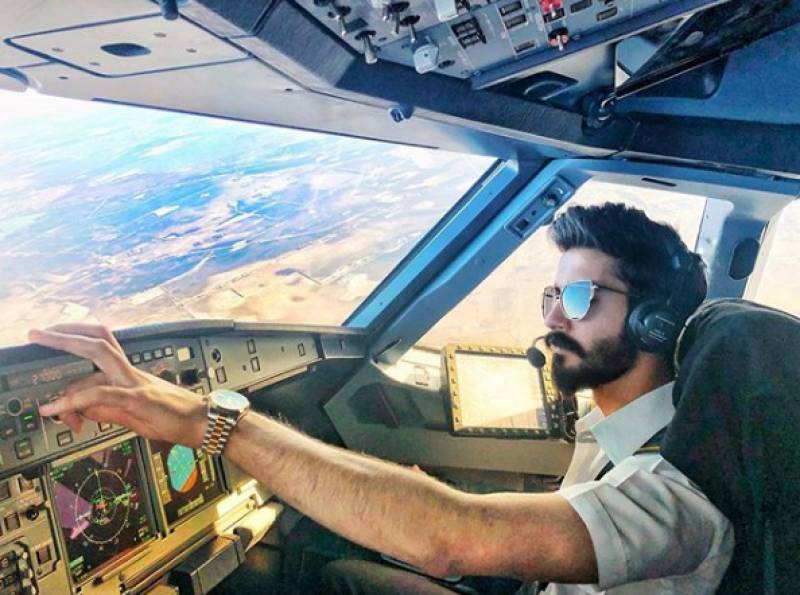 LAHORE – Awais Haider Butt enjoys the feat to be the youngest ever Pakistani professional commercial pilot. He obtained the license when he was only 18.

Awais sat in the cockpit for the first time back in 2016, when he was not even 17. Before it, when he was 16 and a half, he enrolled for the aviation training in Greece and joined the training righter after one week of his A level papers.

Recently, he was in Pakistan and he shared his experience of being a pilot.

Awais Haider Butt was born in Pakistan and raised in the United Arab Emirates where his parents had settled for a job.

His life is all travel and travel and he very rarely lands in Pakistan. “Well becoming a pilot, I would say it, wasn’t something that I achieved overnight,” he recalled.

”There was lots of planning, hard work and dedication, I put towards this goal.”

Did he want to become the youngest pilot of Pakistan?

To meet his dream, he had to sacrifice a lot.

“I can never rest when I have unfinished business. In this case, the unfinished business was to become a pilot. So, a week after I took my A levels exam was my first day at the aviation academy, which meant no summer break for me. But I was pretty happy about it. I finished my training in 18 months. I was 17 when I first flew the training aircraft and 18 when I started flying for a commercial airline,” he speaks in an impassioned tone.

He vividly remembers the day of his first flight.

“The first flight I did was in Greece; I remember it was during the early hours of the day, and I couldn’t sleep all night due to the excitement. A cold sunny morning with beautiful conditions to fly awaited me. The view after we took off was too good to be true. The experience was unmatched, and that’s the day I totally fell in love with aviation and aircraft,” he smiled.

His aviation training regime was not a bed of roses.

“Right when I started my training, there were no looking back and no breaks for me. So I would say hard work, dedication and determination were the contributing factors for me becoming the youngest commercial pilot and definitely my parents’ prayers and family’s support also played the most important role.”

Of all of these aircraft, which was his favourite?

“To pick a favourite is difficult, but I guess I would go with Airbus 320.”

He biggest problem for him used to get logging.

“Travelling in different time zone and being jet-lagged is one of the biggest challenges for any pilots and there is absolutely no cure to it, however, you could cope better with it by having a healthy lifestyle, eating healthy and keeping healthy habits. For this, I do some physical exercise. As of me I absolutely love cricket. I manage to play two to three matches a week that helps me stay in shape physically and mentally.”

When asked to describe the impact of spicy of aviation, such as food on board, Awais Haider Butt first blushed.

“Aviation has come a long way, and everything is evolving really fast in this field. Food has always been good and at a very excellent standard. The menu keeps changing as airlines prefer more of an international menu that fits all.”

Awais Haider Butt himself has hero look. His Instagram handle has more than 86,000 followers. His pictures in uniform, on the runway tarmac and in the cockpit keep his followers connected with the aviation world.

All set for our departure ? The picture is a couple of months old, but if i can recall i was flying off to Russia ?? Comment and let me know what your favourite destination is? #instahood #dubai #mydubai #christiandior #bearded #beardgang #pilotlife #cockpitpicture #cockpit #gopro #metalbird #planepics #howtobecomeapilot #dhaka #chittagong #russia #delhi #mumbai #lahore #islamabad #international #lahore diaries #islamabaddiaries #birmingham #manchester #london #Awaisbutt

What are your goals?

“From a professional point of view, my goal is to just keep working hard and would love if I could end up as a training pilot. And my personal goal is to try my best to increase the literacy rate in Pakistan, to explain to the kids in Pakistan how important education is in today’s world, and to give them a chance at being a successful individual by maybe just giving them the right information and guidance. Because sometimes all we need is someone to guide us. Also, I’ve my Instagram page which is @Awaisax8, with 90,000 people following me. Very honoured to say that there’s a lot of teenagers in Pakistan who think of me as their role model, and they contact me whenever they need guidance in the field of aviation.”