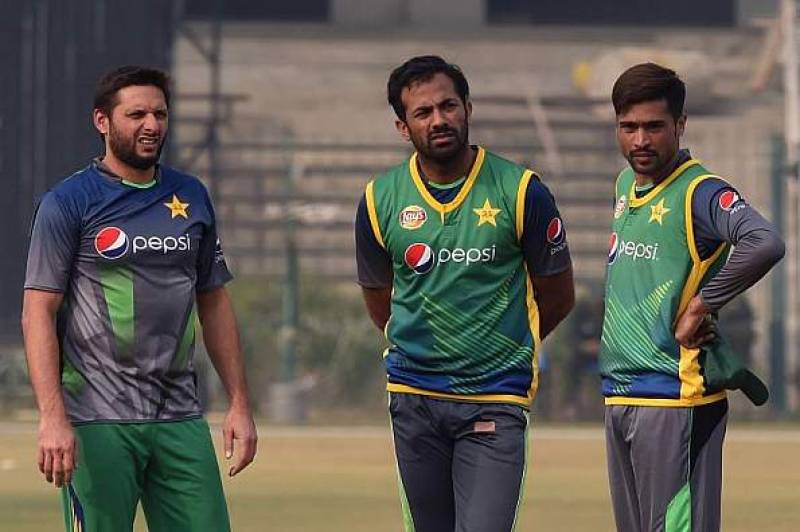 MOHALI (Staff Report) - While Pakistan is all set to face off favourite New Zealand in its third knock at World T20 2016 on Tuesday, batsman Muhammad Hafeez and fast bowler Wahab Riaz are expected to miss the crucial match foe being injured.

According to team management, Hafeez is facing bone contusion in his femur and he will be unable to join the playing eleven against Black Caps.

Meanwhile Wahab also received an injury in the neck as he was hit the ball during a practice session. However the Team Doctor will thoroughly examine the pacer before any final decision about his inclusion in the team.

Left arm pacer Muhammad Amir is also undergoing some lethargy and team management is worried about his fitness ahead of critical match. There are pretty higher chances that Amir will play the match.

Experts believe that exclusion of Muhammad Hafeez and Wahab Riaz is unlikely to affect Pakistan team against New Zealand, because the management had opted out four fast bowlers in India match but they failed to perform up to mark.

Hence the management would probably be looking for including Muhammad Nawaz and Imad Waseem in the playing eleven to replace Muhammad Hafeez and Wahab Riaz respectively. Khalid Latif and Anwar Ali could be two other options for Pakistan.

However, if Muhammad Amir is also not fit and misses the significant match against New Zealand, then there is something to be worried about for Pakistan.