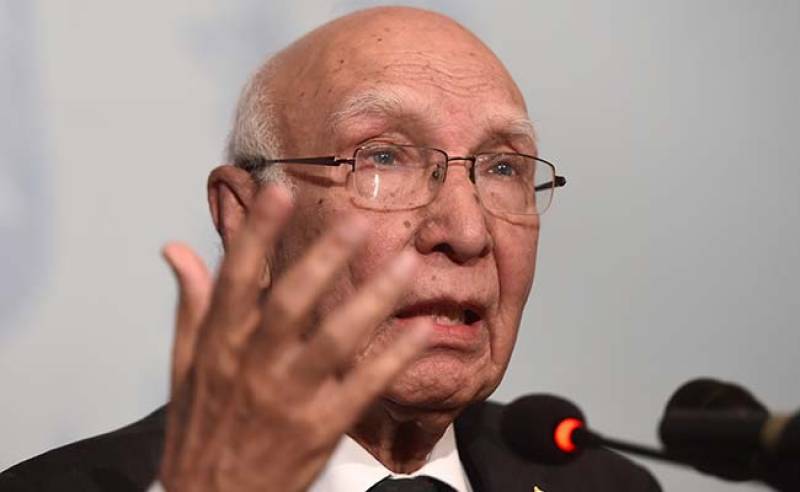 ISLAMABAD - Adviser to the Prime Minister on Foreign Affairs Sartaj Aziz said on Tuesday that the PPP had formally empowered Hussain Haqqani to directly issue visas to Americans.

Speaking on the floor of the upper house, Aziz revealed that the PPP's Ministry of Interior had written a letter to the former ambassador on July 16, 2010, authorising him to issue diplomatic visas to Americans.

Aziz noted that this marked a significant policy change, as the number of such visas issued to Americans saw a surge after the letter and reached 2,487 in six months.

'In the preceding six months, 1,659 diplomatic visas had been issued' he revealed adding that Haqqani was used as a willing instrument by the then political leadership.

The adviser also said Haqqani did not correctly state the number of visas he had authorised when he spoke before the Abbottabad Commission.

Senate Chairman Mian Raza Rabbani remarked that the decision on whether to form a committee or otherwise will be taken by the parliament.

He alleged that a lot of 'equipment' had also been cleared in those days.

On the other hand,  PPP Senator Farhatullah Babar while fending off the allegations said there was no new revelation in Haqqani's article adding that a hype was being deliberately created to malign and tarnish Zardari's image.

The former ambassador to US stirred controversy when he admitted in an article published a few days ago that he facilitated the Obama administration to shoot down Osama Bin Laden without the help of Pakistan’s armed forces or intelligence agencies.