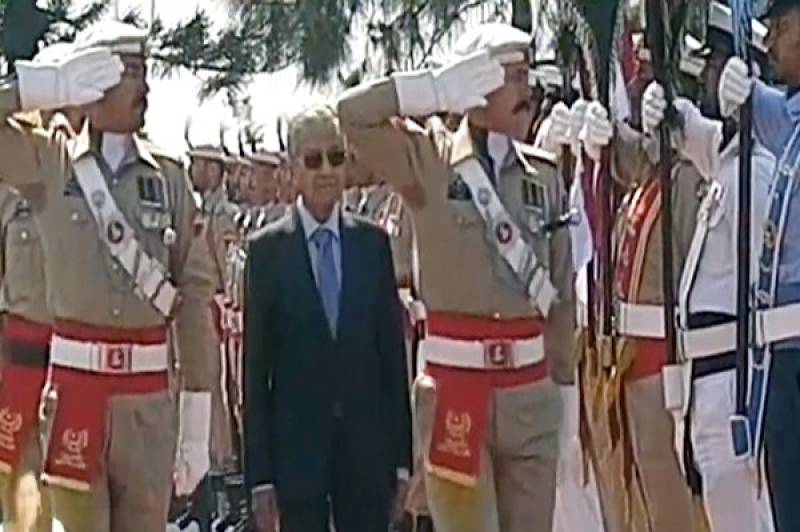 Prime Minister Imran Khan accompanied his Malaysian counterpart to the PM House where he is scheduled to meet other leaders including Chief of Army Staff (COAS) General Qamar Javed Bajwa and President Arif Alvi.

National anthems of both the countries were played on the occasion and a smartly turned out contingent of the armed forces presented guard of honour to the visiting dignitary.

The Malaysian premier is on a three-day visit to Pakistan at the invitation of Prime Minister Imran Khan. Malaysian PM Mohamad will be the guest of honour at the Pakistan Day Parade on March 23.

Malaysian Prime Minister, Dr Mahathir Mohamad and Prime Minister Imran Khan will hold talks on the entire gamut of bilateral relations, as the one-on-one meeting between the two prime ministers will be followed by delegation level talks in which both the sides will discuss ways and means to further bolster their relations.

Both countries are expected to sign three MOUs for the promotion of cooperation in different sectors.

Malaysia is expected to invest eight to nine hundred million dollars in the fields of IT, Telecom, Power Generation, Textile, Agriculture and Halal Food industries.

Pak-Malaysia Business Leaders’ Round Table Conference will be held this afternoon in which the private sector from both countries would explore opportunities and potential of various sectors of the economy for mutual cooperation.

At an investiture ceremony at Aiwan-e-Sadr this evening, the Malaysian Prime Minister will be conferred upon Nishan-e-Pakistan, the highest civil award of Pakistan which will be followed by a banquet in honour of the visiting dignitary and his delegation.