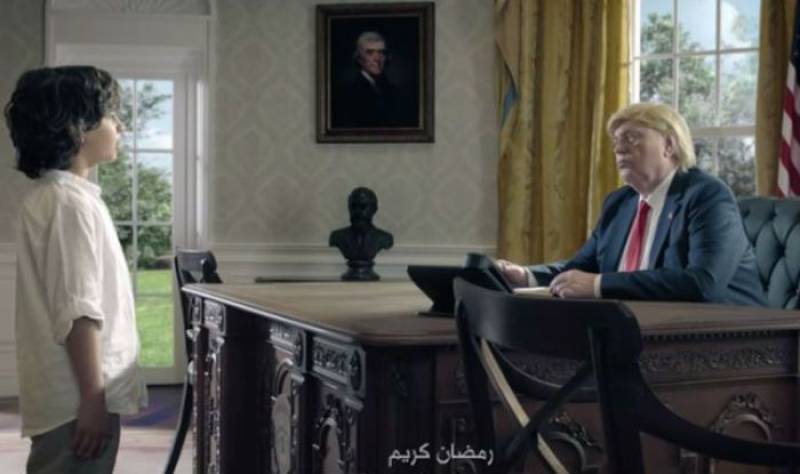 The three-and-a-half minutes long video “Mr. President” also features a young Arab child singing and appealing to major heads of state to end the conflicts in the Middle East and to help Muslim refugees. The lyrics touch upon violent bombing campaigns across the region, the refugee crisis and the controversial US decision to recognise Jerusalem as the capital of Israel and move its embassy there, despite conflicting Palestinian claims to the holy city.

In front of an unmoved Trump, the boy wishes the President a happy Ramadan, and asks him to break the fast together, “if you can find my home under the debris.”

The boy then takes Russian President Vladimir Putin by the hand and tells him about his family’s loss in war, before meeting German Chancellor Angela Merkel and Canadian Prime Minister Justin Trudeau at a beach while refugees come ashore. In another scene, UN Secretary General Antonio Guterres is seen helping Burmese Rohingya refugees to safety.

Then, North Korean leader Kim Jong-un hangs his head in sadness, standing in the remains of the boy’s bombed-out bedroom.

The boy then frees a young girl wearing a Palestinian scarf from prison. The girl looks like a much younger version of Ahed Tamimi, an imprisoned Palestinian teenager arrested last year for kicking and slapping Israeli soldiers in her West Bank village of Nabi Saleh.

The video closes with the repeated chorus: “Our Iftar [fast-breaking] will be in Jerusalem, the capital of Palestine,” as the boy leads Arab leaders towards the Dome of the Rock in Jerusalem, a Muslim holy site located in the contested city.

Palestinians claim Jerusalem as their historic capital. Israeli law claims the entirety of the city as the capital of Israel, however.

Jerusalem was divided by the 1949 armistice that ended the war in which Israel was established. Parts of east Jerusalem, including the Old City, were annexed by Israel after the 1967 Six-Day War. President Donald Trump’s recent relocation of the US Embassy from Tel Aviv to Jerusalem was seen as an endorsement of the Israeli annexation, provoking anger across the Arab world.

In just five days, the video has had over four million views.

This is not the first politically or religiously-charged ad campaign for Zain mobile. At the beginning of last year’s Ramadan, an anti-terrorism ad urging Muslims to “confront your enemy, with peace not war” gathered almost 15 million views.

With 47 million customers throughout the Middle East and North Africa, Zain is one of the world’s largest mobile phone operators by geographical area.