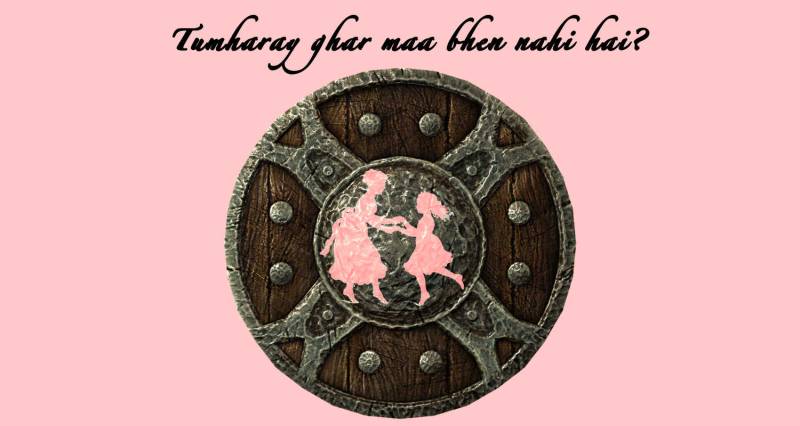 Following a number of controversial incidents in recent days, women’s and men’s rights groups have been lobbying for greater protection from the state to each gender. The resulting solution is the invention of a body-covering suit, plastered with certain key words to ward off the other gender.

After a vicious attack by a Frontier Corps personnel on a female journalist outside a NADRA office, women’s rights activists have called to ensure adequate security arrangements for women during their reporting assignments. These arrangements are said to include the wearing of a suit bearing words like ‘sister’ and ‘mother’ among other possible familial relations. This new invention MBS (Maa Bhen Shield) is geared to remind angry males that they too are related to a woman or two, as well as informing them of the looming possibility that the woman they are about to violate might be their long lost phuppi. The idea is to stun the Pakistani male into the ‘family’ state of mind and one feature of the suit (geared for true emergencies) is to blare the words:

This statement, as you know, has immeasurable power over the male psyche and can be potentially damaging to the man’s reputation, forcing him to seize on the spot (amongst a general cloud of awkwardness).

Meanwhile, men’s rights activists have flocked to the defense of sexually objectified chaiwalas everywhere who is now being told to don the MBS suit to bar young girls from featuring him in their selfies. The suit will not work the same way as it does on women as the mere blockade of those piercing blue eyes is said to extinguish sexual tension. While it was suggested that Arshad Khans suit be plastered with the word ‘brother’ to remind women of their familial relations, it was made clear that he is a man first and everyone knows that.