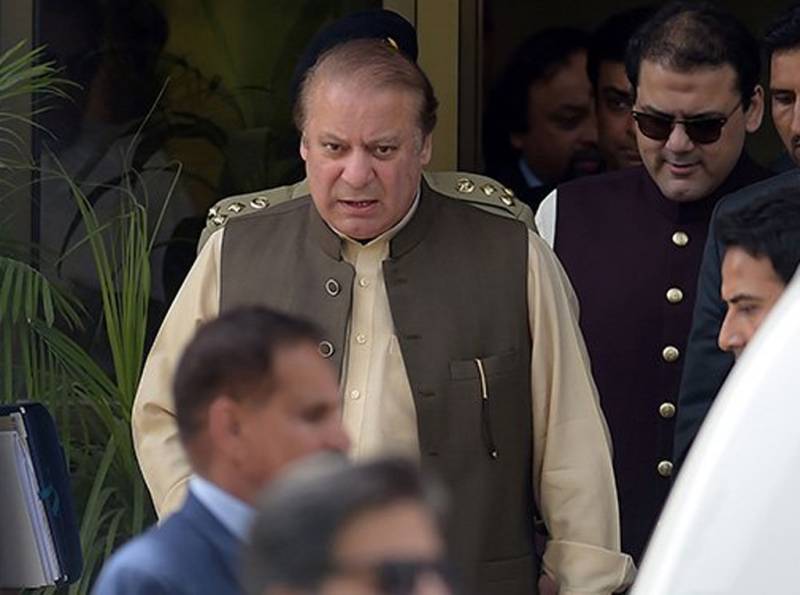 ISLAMABAD - Citing the recent actions by Chief Justice of Pakistan, Mian Saqib Nisar, former Prime Minister Nawaz Sharif asserted on Monday that a regime worse than a martial law had been imposed across Pakistan.

"What is prevalent in the country is not a democracy, but the worst kind of dictatorship under [Chief Justice] Saqib Nisar," claimed the former premier as he talked to media outside the accountability court in Islamabad.

The Pakistan Muslim League Nawaz 'Quaid for life' continued that what was happening in the country was not less than a 'judicial martial law adding that restrictions being imposed today, were not even enforced during the martial law.

The 68-year-old politician claimed that serious efforts were being made to get him convicted in the corruption references being heard by the accountability court.

The former lawmaker also fired a broadside at Pakistan Tehreek-e-Insaf over the recent Senate elections and expressed that Jamaat-e-Islami chief Sirajul Haq's statement regarding the massive horse trading should be pondered over.

"Imran Khan should also ask himself on whose orders his party gave votes in the election," said the premier and inquired whether the people who practice un-principled politics can bring 'change'?

The former premier challenged his arch-rival Pakistan Tehreek-e-Insaf supremo to own his vote for Pakistan Peoples Party.

ISLAMABAD - An accountability court on Monday adjourned the hearing of a corruption case regarding Al-Azizia Steel ...

"Imran Khan should also inform the public how the party's candidate Chaudhry Sarwar bagged a Senate seat from Punjab", wondered the former premier.

As many as three corruption references have been filed against the Sharif family by the anti-corruption watchdog, on the directives of the top court, which pertain to the Al-Azizia Steel Mills and Hill Metal Establishment, offshore companies including Flagship Investment Ltd, and Avenfield properties of London.

LAHORE - Jamaat-i-Islami (JI) emir Senator Sirjaul Haq has claimed that the Pakistan Tehreek-i-Insaf had voted for ...

Nawaz Sharif and his sons Hussain and Hasan are accused in all three references whereas his daughter Maryam and son-in-law Capt (r) Safdar are named in the Avenfield reference.

Nawaz Sharif and Maryam Nawaz are currently in London to inquire after the health of Begum Kulsoom Nawaz and the next hearing of the case is set for April 23.