It's about time Britain stops exporting terrorism to Pakistan 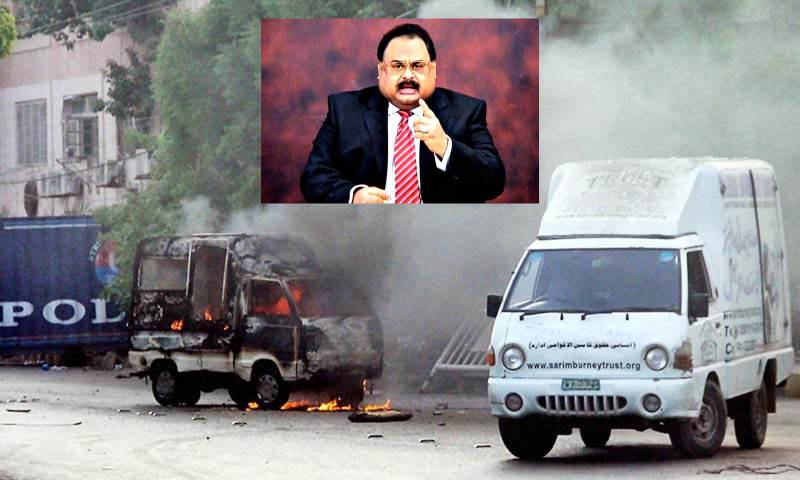 Imagine a British person sitting in Karachi inciting violence in London. Violence which aims to spread terror and establish a parallel government, halting all activities in London at an hour's notice. Lets suppose this specific person has a cult following of sorts. A sort that exceeds 4 million supporters. Now this is a good mass of people, a crowd that would be difficult to control by any law enforcement agency of the world. To fully comprehend the current reality, we must also suppose that the Pakistani government is willing to do nothing to stop this person from wreaking havoc in London.

In the above scenario, Pakistan would have to face immense consequences. The global community would question the very motives of Pakistan. A country which has lost more than 25,000 law enforcement officials and civilians to terrorism would be accused of sponsoring it. The West would further accuse Pakistan of providing safe haven to terrorists. There would be editorials in all the major newspapers of the world.

Then why is it different when a criminal is sitting in London instead of Karachi can incite mobs to kill journalists, politicians and security-forces personnel?

Yesterday, during a speech by Altaf Hussain, from the comfort of his residence in London, he asked the party workers how they were allowing TV channels to air material against the party, inciting them to attack unfriendly journalists in Karachi. This resulted in an orgy of violence and madness that shut down the city for the rest of the day and resulted in the death of one and injury of scores of journalists. Additionally, Altaf Hussain called for the breakup of Pakistan and murder of the Prime Minister Nawaz Sharif, the Army Chief General Raheel Sharif and the DG Rangers Major General Bilal Akbar.

All this was done from London where authorities usually knock on your door if the music is too loud.

Altaf Hussain, the leader of the Muttahida Quami Movement (MQM), has now been a resident of the United Kingdom for over 30 years. His political party is notorious for organized crime in the city of Karachi. Anybody who has had the opportunity of going to Karachi quickly learns that the city can come to complete halt at any time. Public transport shut down, shops closed and those who dare to defy often suffer the most lethal consequence, death. How you may ask? At the orders of a leader who lives in North London suburb of Edgware.

Altaf Hussain talks about gruesome murder techniques in a live speech to Karachi.

Mr. Hussain is a notorious criminal of Karachi. Having nearly 72 cases to his name including 31 allegations of murder. With authorities hot on his tail, Altaf Hussain fled to the UK where he was granted citizenship in 2002. Altaf left behind a complex network of organized crime. People who would collect extortion money in his absence and continue to instill fear in the residents of Karachi.

An article by Owen Bennett-Jones in The Guardian about Altaf Hussain raises disquieting questions about the way he was given British citizenship. Why no notice was taken for years of his provocative speeches delivered from London? British Foreign and Commonwealth Office (FCO) was alleged to be benefiting from having the man with ministers in Pakistan at their doorstep. In the aftermath of Altaf Husain's most recent speech on 22nd August 2016, the article seems to make more sense then ever. Why is Britain allowing someone to incite violence in Pakistan? Will this export of terrorism not create hue and cry in the global community? If Pakistan had committed such outright sponsorship of terrorism, sanctions would have already been imposed.

The MQM has been declared a violent organization on two occasions by British judges. Ex Police officers of Karachi have been given asylum due to threats by the MQM for registering cases against party members. In one such case, the Britain court even recognized that the MQM has killed over 200 police officers that have stood up to them.

This brings us to the question, if MQM has been widely accepted as a militant organization that has been recognized to be involved in organized crime, including money laundering in Britain (breaking British laws), why is it that Altaf Hussain enjoys immunity from all laws in London?

MQM is also under investigation by London Met Police for the murder of its own leader Imran Farooq, whose perpetrators, by their own admission, successfully fled Britain and were apprehended in Karachi.

Why is Altaf Hussain so sure that he can flout British laws with impunity and always get away with it?

The answer is simple, what Owen Benett Jones writes about MI6's open patronage of Altaf Hussain:

“British interest in the MQM is largely driven by the perception that the party offers a defence against jihadis. But there is more to it than that. The MQM is British turf: Karachi is one of the few places left on earth in which the Americans let Britain take the lead. The US consulate in Karachi no longer runs active intelligence gathering operations in the city. The British still do. When it comes to claiming a place at the top table of international security politics – London’s relationship with the MQM is a remaining toehold,” he writes.

MI6's support and protection of Altaf Hussain has become the most public secret of Britain's spy activities in Pakistan. And the agency does it with impunity too, from Altaf Hussain getting British nationality in an unprecedented way bypassing all British laws, to Altaf Hussain being able to speak to crowds of thousands and openly talk about murder without as much as a knock from the police in a city where people can be sent to jail for noise complaints or smoking a cigarette inside their own apartments is not an error of omission, but a well-considered pillar of British strategy in Pakistan.

According to A S Daulat, former Chief of Indian intelligence agency Research and Analysis Wing (RAW), Altaf Hussain is "a guest of Mi6 in London" he said in a recent interview to NDTV.

To be exact, Altaf Hussain is not just a guest of MI6, but the classic middleman of colonial times, a viceroy, that is deputed to project British power in the biggest city of a former colony.

It seems that MI6 is clutching on to to colonialism by its fingernails.

The British public, which has a problem with Europe's cultural influence of Britain, is not even aware of the kind of influence their own government wants to exert on third-world countries using violence and terrorism. The state-sponsored media in Britain largely stays quiet about the clandestine activities of its own intelligence agencies that support violence in other countries. For something of such scale that is so disruptive to the life of an average Karachiite, the attention this issue receives from the British media and the British public is minuscule.

This should, if Britain is to be treated the way it treats other countries, result in Pakistan's refusal to act against any terrorists in Afghanistan or elsewhere that attack British security forces or civilians. Not only this, but if Pakistan actively supports and provides safe heavens to terrorists responsible for violence in Britain it should not be considered an act of aggression but an act of reciprocity on the part of Pakistan.

After all, Britain has no higher moral ground here anymore.

Therefore, the outright support that Britain provides to terrorism in Pakistan must stop if Britain is serious about ending terrorism in the world.

Britain must take a stand against the atrocities committed by gangs and mobs on the behest of Altaf Hussain. If they don’t then the global community must pressurize them to do so. Altaf Hussain must be brought to justice and the United Kingdom is at the best position to make it happen. We need from the British a powerful act against terrorism, not just useless rhetoric.