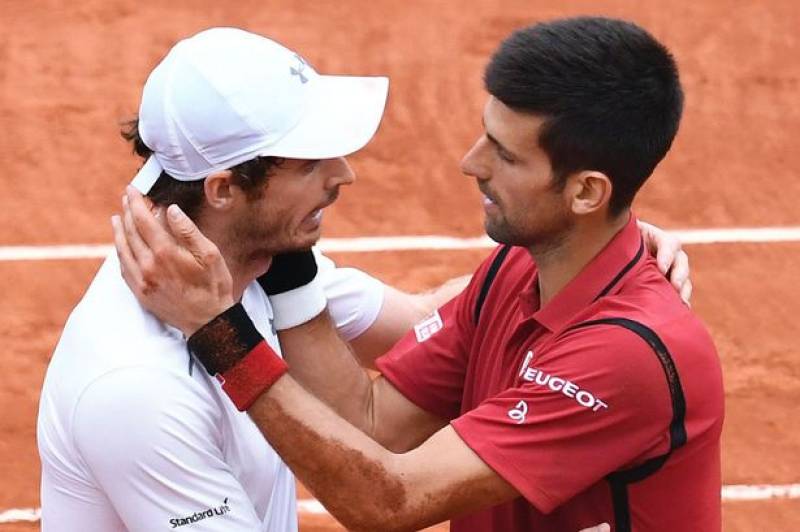 LONDON: Novak Djokovic and Andy Murray are on course for a Wimbledon final showdown after being confirmed as the top two seeds for the grass-court grand slam.

World number one Djokovic and second-ranked Murray will be seeded in those positions in the tournament, All England Club officials announced yesterday. This means that the two maestros can not meet until the final as they will be placed at opposite ends of tomorrow’s draw.

Djokovic is bidding to win Wimbledon for a third year in a row - and fourth time, overall - in pursuit of a rare calendar grand slam, a rare honor in tennis afforded to those who win all four grand slams in the calendar year.

Murray is aiming to win his third grand slam title and his first since beating Djokovic in the 2013 Wimbledon final, which made him the first British male singles champion at the All England Club for 77 years.

The Scot has had a poor run of recent form against Djokovic, losing 13 of his last 15 matches with the Serb, including this year’s Australian and French Open finals. However, Murray's record on grass is far better as he has won their last two meetings on grass and is in fine form after lifting the Queen’s Club title for a record fifth time last week.

17-time grand slam winner Roger Federer, who was beaten by Djokovic in the last two Wimbledon finals, will be seeded third and look to secure a record-breaking eighth Wimbledon title.

Federer - who suffered major injury setbacks this year, causing him to miss the French Open - has not won a major title since Wimbledon 2012.

Defending champion Serena Williams will be top seed in the women’s draw as the American looks to equal Steffi Graf’s Open era record by sealing a 22nd grand slam triumph.

Serena, a 6-time Wimbledon winner, has failed at the last hurdle in her last two grand slams, with surprise defeats at the Australian and French Open finals this year.

Seedings at Wimbledon, which starts on Monday, are determined using a combination of a player’s ranking points and their results in grass-court matches.