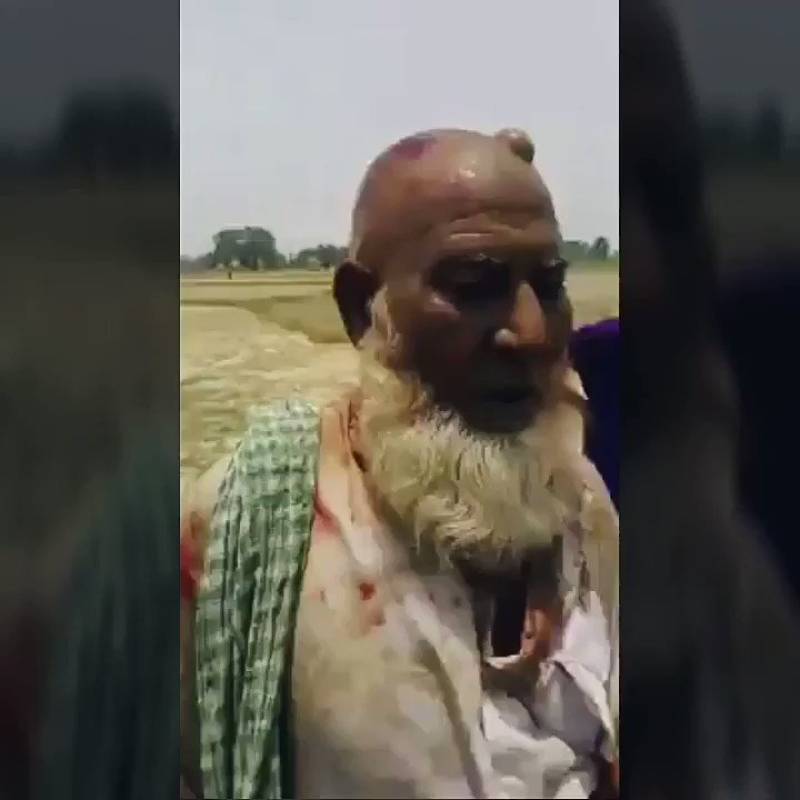 NEW DELHI - In another act of cow vigilantism, a 65-year-old Muslim man was brutally beaten up and filmed in connection with a recent lynching event in the Hapur city in Uttar Pradesh state of India.

In the chilling 60-seconds video, Samiuddin can be seen being roughed up by the raged Hindus who are seen questioning him about the identity of another man, alleging him of cow smuggling.

Apparently, the helpless senior is filmed minutes before the baying crowd caught hold of a 45-year-old Qasim and lynched him to death over affairs related to a cow, considered sacred in the Hindu religion.

The surfacing of the video has also negated the claims of police which had earlier stated that unidentified individuals had attacked the duo in Pilakhuwa area.

Hapur Superintendent of Police, Sankalp Sharma detailed in an interview to Indian daily that an FIR was registered on the basis of a complaint by Samiuddin’s brother Yasin who alleged that the killing squarely related to cow vigilantism.

'As far as the allegations about attempted cow slaughter or cattle smuggling is concerned, we are investigating the matter,' he added.

Qasim’s daughter-in-law Arshi explained that the deceased left the home on Monday stating that he will be back by 4 pm.

'He took around Rs 60,000-70,000. He used to go to neighbouring villages to procure and sell cattle and we thought that it must be regarding his business,' said Arshi.

However, the trader was lynched, a video of which emerged showing Qasim lying in a field, his clothes torn and bruises across his body.

In the video, Qasim pleads for some water as a group of young men surround him but the request was denied.

“They did not give him water because he was a Muslim,” said Mohammad Salim, Qasim’s younger brother.

The allegations that the lynching was connected to cow slaughter are repeated by families of the accused and residents of Baghera Khurd as well.

The Muslims in 'world's biggest democracy' have been facing the wrath of ultra nationalists Hindus who don't leave any chance to torture the marginalized community over cow related affairs.