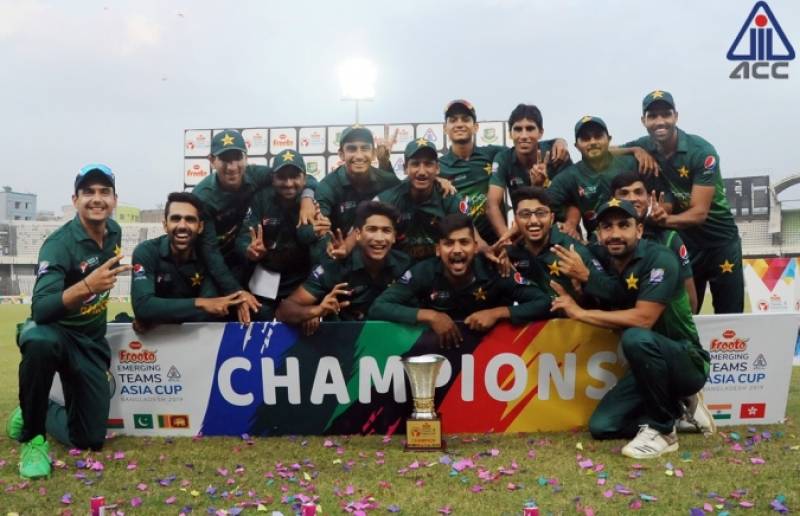 LAHORE – Rohail Nazir’s sparkling century helped Pakistan beat Bangladesh by 77 runs in the final of the ACC Emerging Teams Asia Cup 2019 at the Sher-e-Bangla National Stadium in Mirpur on Saturday.

After being put into bat, the openers Omair Bin Yousuf (4 off 15 balls) and Haider (26 off 23 balls) fell early leaving Pakistan 41 for two in the eighth over.

After the departure of the opening pair, Imran Rafiq and Rohail Nazir got together and contributed a 117-run partnership for the third wicket. Imran’s 62 off 88 balls included four fours and two sixes.

Saud Shakeel played a captain’s innings and contributed a quick-fire 42 off 40 balls to help his side reach 301 for six in 50 overs.

Afif Hossain coming to bat at number five, top-scored with a 53-ball 49, hitting four fours and a six. The home team captain Nazmul Hossain’s innings of 46 off 53 balls, and Mahedi Hasan's 42 off 45 balls went in vain.

For Pakistan , Mohammad Hasnain took three wickets for 32 runs in 8.3 overs. Khushdil Shah and Saif Badar chipped in with two wickets apiece for 39 and 27 runs, respectively.

Wicket-Keeper batsman Rohail Nazir for his century was named the player of the final.