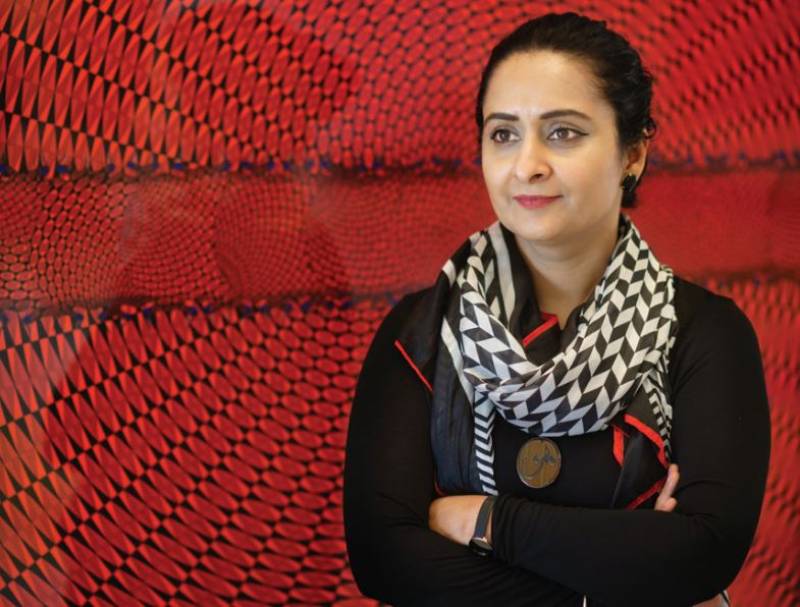 Chawkandi Art Gallery with the support of HBL is currently celebrating 28 years of Aisha Khalid’s career with large scale retrospective exhibition. Curated by Masuma Halai Khwaja, I AM AND I AM NOT spans three decades, exploring the art of one of Pakistan’s leading artists. A twenty-eight-year long practice, that begins with her formative years at art school up unto the present, specifically from 1994 to 2021, with works in the exhibition that allude to the future, as Khalid’s art continues to evolve. A remarkable journey, that is as much about her life and loves, as it is born of the socio-political context, in which her work is firmly rooted, the exhibition of seventy works, is spread across three venues, from the iconic Frere Hall to Chawkandi Art Gallery, and AAN Gandhara Art Space & Museum.

As a prominent woman artist, educationalist, agriculturalist and curator, Aisha Khalid has effortlessly advanced herself to become one of the most significant artists of her day. Since the nineteen-nineties Khalid has played a vital role in the contemporary neo-miniature movement, redefining miniature painting in Pakistan and its reception worldwide. Creating dramatic conflations of pattern and geometry that form a field of inquiry that is as much about power dynamics, specifically the North-South divide, as it is concerned with spiritual connections.

Having grown up in Shikarpur interior Sindh, Khalid’s worldview is deeply rooted in the history of the East.

Indebted to the ancient vocabulary of Mughal Miniature, Khalid has extended the medium to video, in-situ installation, and immersive textile-based works that offer a critique of global politics and Orientalism, and for that Khalid’s contribution to the contemporary miniature paintings and Pakistani art is immeasurable. Having received her formal training as a miniature painter from the National College of Arts Lahore, she very quickly sought to stretch the boundaries of traditional miniature practice beyond its obvious limitations of scale and two-dimensionality, to include the physical and ephemeral elements of ‘space’, ‘time’ and ‘sound’ to her work.

As Khalid challenges preexisting cultural and political frameworks, encouraging audiences to re-examine ideals. Her distinct imagery and visual vocabulary emerge from her own surroundings, influences and childhood memories.

More recently in 2018 Khalid was commissioned to paint a vast mural, ‘You are the universe in ecstatic motion’, for Islamabad International Airport, situated in the departures lounge. Her work, including a series of commissions, is included in a number of leading museums and private collections all over the world.

Exhibition venues: Frere Hall Fatima Jinnah Road, Saddar Civil Lines, Karachi Chawkandi Art Gallery 105 Marine Point, Block 9 Clifton, Karachi AAN Gandhara Art Space & Museum F-65/2, Block 4, Clifton, Karachi Sponsored by 105 Marine Point, Block 9 Clifton, Karachi +92(021)35373582, 35871025 Email: chawkandi@gmail.com Website: www.chawkandi.co Aisha Khalid’s retrospective entitled ‘I Am And I Am Not’ is intended to draw on her leading artworks, beginning with small-sized paintings, to full-scale installations, textile-based tapestries, video pieces, art books, to more recent works. As the retrospective offers an opportunity to survey the multidisciplinary approach of one of Pakistan’s most celebrated contemporary artists. Engaged in art that is as purposeful as it is poignant, as it proves purposeful, not only as an artist, but as an intellectual, with the creativity and courage to influence and inform thought processes, for audiences to absorb as well as appreciate eastern perspectives. This major retrospective exhibition of Aisha Khalid I AM AND I AM NOT is accompanied by a catalogue.