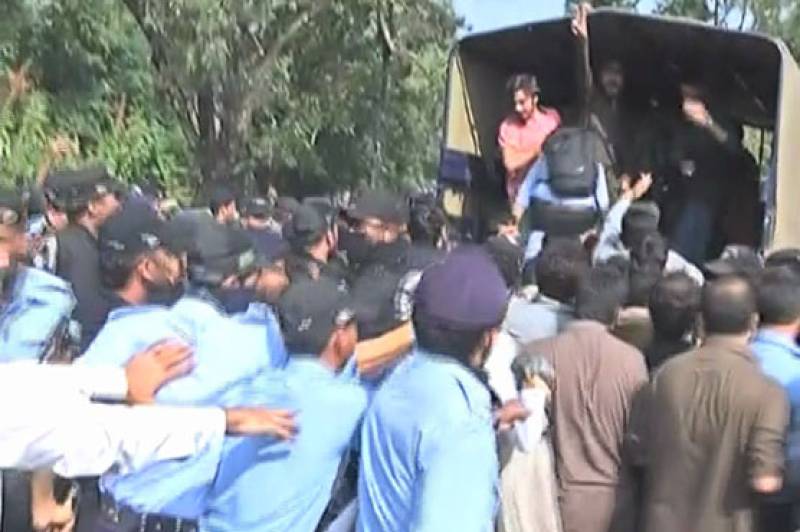 MONDAY - Over 100 students of Quaid-e-Azam University were taken into custody on Monday after they staged a protest seeking withdrawal of expulsion of students by the university administration.

According to the police, some of the students lay down in front of the university buses while others tried to disrupt the academic activities prompting police to launch a massive crackdown.

The top-ranked university kept its door shut for 16 days after scores of students raised voice against a 10 percent swell in fee but the campus re-opened for teaching and other academic activities on Friday following a settlement between the university administration and Quaidian Students Federation activists on the matter of fee.

The issue of around 40 students detained during earlier clashes remained unsolved, for which the university's syndicate devised a three-member committee to review the sentences given to the students.

After the reversal of fee hike, the QSF called off the strike, but some students, mostly of the Baloch Student Federation, censured the administration for not withdrawing the decision regarding the expulsion of students.

They had vowed to meet on Monday (today) to finalise future course of action.

On the other hand, university magistrate Abdul Hadi said that student councils had fallen into a row as six of them held talks with Baloch Council last night but it did not agree on the terms.

As soon as Monday dawned, the enraged students tried to express their grievances but to their dismay, the law enforcers detained dozens apart from facilitating the resumption of academic activities.

At the beginning of October, students started a protest for better facilities in the hostel and for the cancellation of the recent hike in fees. At that time, a heavy contingent of police arrived to control the unrest, firing tear-gas shells to disperse furious students.

The severity of the clashes could be gauged from the fact that authorities called in Rangers to maintain the law and order situation.

Quaid-i-Azam University (QAU) was ranked among the top 500 universities in the world, according to the rankings issued by the Times Higher Education World University Rankings in September.