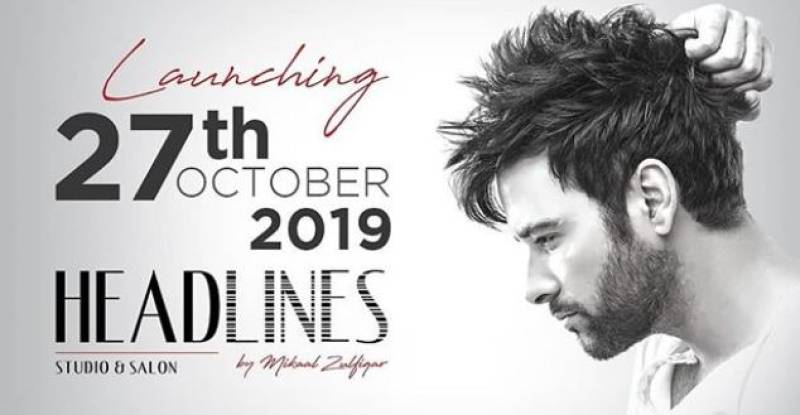 LAHORE - Mikaal Zulfiqar is among the top dashing men of the Pakistani showbiz industry. The handsome hunk has become the nation’s hot favourite not only for his undeniable good looks but also his command as an actor.

Apart from being a brilliant actor, he is popular for his sense of fashion and style. His charming personality made him one of the most desirable men in Pakistan.

Here we have good news for those who follow the actor’s footstep to take some grooming notes. As Mikaal is all set to launch his own men studio and salon. Yes, you read it right. The salon will be launched in Lahore.

Hmm.. What am I upto with all these looks and hairstyles? Any guesses? #bts

Earlier, Mikaal took to his Instagram and revealed motion logo of the saloon. He also shared the name of the saloon which is ‘Headlines For Men by Mikaal Zulfiqar’. Alongside the motion logo, Mikaal penned down a promotional note.

Have put together the best team to cater for all your hair and beard style requirements. Whether its neat and clean or full on funk! We've got it all @headlinesformen studio and salon. Located in Lahore Defence phase 5 commercial. Offering a range of services to keep u looking great. Launching 27th October 2019. Video directed by the amazing #DawarKhan @daaawar hair, beard and make up by my own #Headlines #Crew Style it like its Hot!

Along with an amazing poster, he wrote, “Here what I’ve been upto!! Gentlemen gear up to make headlines. Your all-round men care destination in Lahore! Watch out for HeadLines for Men.”

Mark your calendars‼ @headlinesformen is opening in #Lahore on 27th October ! Make the most of my experience in style and fashion and make headlines of your own!🙌🏼 Hair&Makeup: @headlinesformen Photography: @mohsinkhawarphotography #HeadlinesByMikaalZulfiqar #LaunchingSoon Follow 👉🏼 @headlinesformen 👈🏼 for all the latest

On the work front, Mikaal is entertaining his fans in drama serial Ruswai and Ramz-e-Ishq. He is receiving commercial and critical acclaim for his intense acting skills. Apart from this, there are also rumours that he has bagged a new film. But there is no official confirmation regarding the news.

Best wishes to the star from Team Daily Pakistan Global.