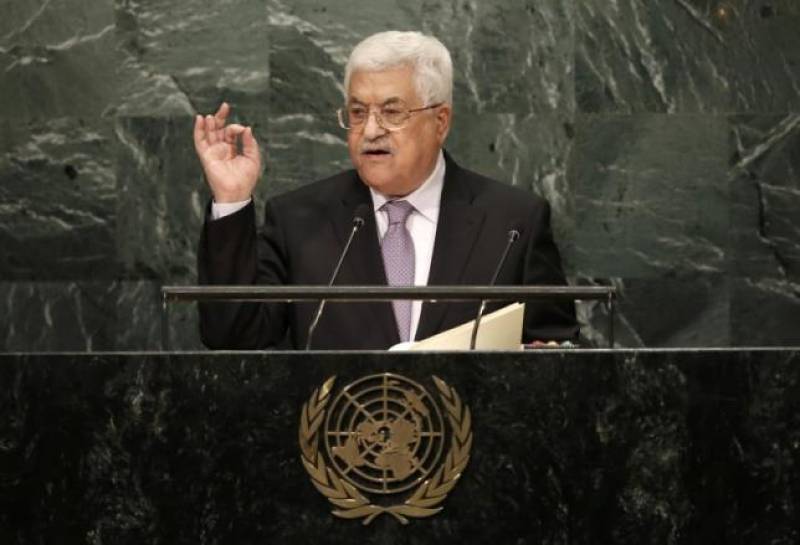 NEW YORK - Palestinian President Mahmoud Abbas has asked Britain to tender an unconditional apology for 1917 Balfour Declaration which endorsed foundation of a Jewish homeland on the Palestnian lands.

He further added that Palestinian people have been suffering from the promise made by Britian some one hundred years ago. The Arthur Balfour Declaration promised a Jewish country on Palestinian lands, but the rights of others living there have been undermined, he said.

"We ask Great Britain, as we approach 100 years since this infamous declaration, to draw the necessary lessons and to bear its historic, legal, political, material and moral responsibility for the consequences of this declaration, including an apology to the Palestinian people for the catastrophes, misery and injustice this declaration created and to act to rectify these disasters and remedy its consequences, including by the recognition of the state of Palestine," Abbas said in his General Assembly address, maintaining that this is the least Great Britain can do for Palestinians.

He also urged the United Nations to declare 2017 an year to end Israeli occupation of Palestinian lands.

The British diplomats present at the UNGA session did not issue any comment in response to the Palestinian demand.

However, Israeli Prime Minister Benjamin Netanyahu, speaking at the forum shortly after Abbas, reacted to the address of Mahmoud Abbas saying "President Abbas just attacked from this podium the Balfour Declaration...That’s almost 100 years ago. Talk about being stuck in the past."

He also invited Palestinian President Mahmoud Abbas to address the Israeli parliament, and in return also expressed his intention to speak at the Palestinian parliament.

Earlier on the first day the UNGA session, US President Barack Obama also took up Israel-Palestine conflict in which he openly admitted the Israeli occupation of Palestinian lands.

He also urged Palestinians to give up the violence and accept the state of Israel. Reciprocally, the US president called on Israeli leadership to admit the fact that they could not maintain occupation forever.