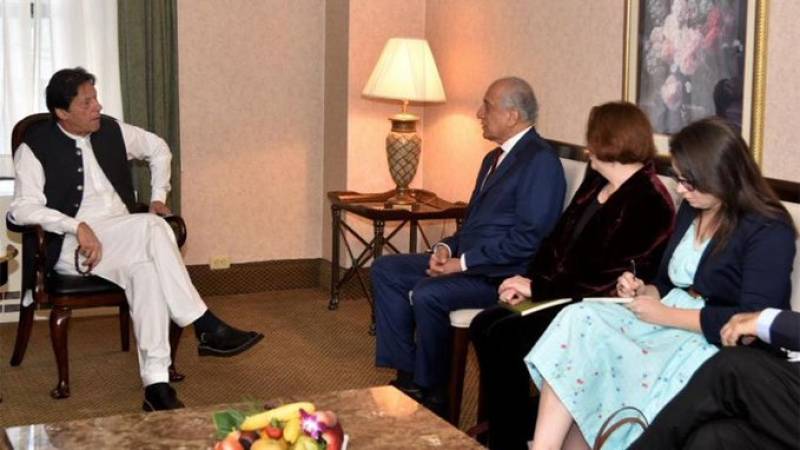 Khan also met Republican Senator Lindsey Graham to discuss the failure of US-Taliban negotiations in Qatar. Graham was one of four Senators who had written to US President Donald Trump to call to his attention the "worrying situation" in Kashmir.

“We thanked him (Graham) for taking on the responsibility to raise his voice for the unarmed Kashmiris...," Foreign Minister Shah Mehmood Qureshi spoke of PM Khan’s meeting with the US senator. The visiting Pakistani delegation had requested Senator Graham to continue to raise his voice and told him that US Congress can play an important role in this, he added.

In a statement released on Sunday, Pakistan’s Foreign Ministry said that the two sides discussed Afghanistan and Pakistan-U.S. joint efforts for peace in Afghanistan.

According to the statement, Khan has recalled that “Pakistan had always held that there was no military solution to the Afghan conflict.”

He added that his country would continue to support all initiatives towards achieving a sustainable peace in Afghanistan and hoped for an early resumption of the peace process.

“Condemning the recent surge of violence in Afghanistan, the Prime Minister said that peace in Afghanistan was vital to advancing his Government’s vision for a peaceful neighborhood and for economic development and regional stability,” the statement said.

Meanwhile, Pakistan’s Foreign Ministry said that all parties must play their role in strengthening peace and promoting reconciliation as a shared responsibility.

Khalilzad, the chief negotiator of the U.S. held nine rounds of talks with the Taliban representatives in Doha, the capital of Qatar, in a year where the two sides had reached an agreement “in principle” but the process was called off after the Taliban carried out an attack in Kabul in which 12 people including an American soldier were killed.

US President Donald Trump on September 9 that the negotiations with the Taliban “are dead” and emphasized that he had no further interest in meeting with the leaders of the group to end the war in Afghanistan.

He also had a meeting with Amnesty International Secretary-General Kumi Naidoo and discussed the Kashmir issue.

Khan reached New York on Saturday where he will address the 74th session of the UN General Assembly (UNGA) on September 27, which would focus on Pakistan's perspective and position on the Jammu and Kashmir issue and on its current human rights and related dimensions.