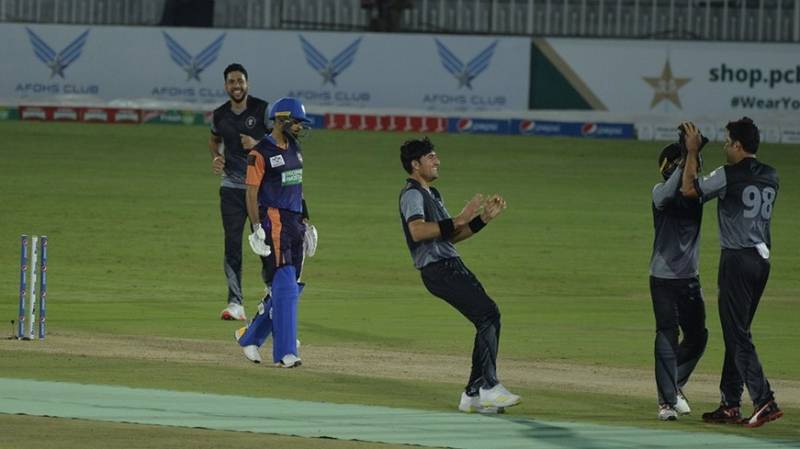 Khyber Pakhtunkhwa on Thursday started their National T20 title defence with 36 runs victory over Central Punjab with Mohammad Rizwan hitting a sparkling half-century and Iftikhar Ahmed striking a quick-fire 40 not out.

Rizwan hit seven fours and a six to pile up 65 runs in 40 balls, while Iftikhar’s 25-ball 40 included six fours and a six. The two helped the defending champions to collect 187 for five in 20 overs after being put into bat on Thursday evening.

Central Punjab lost Kamran Akmal (three) in the fourth over to Imran Khan Snr, Babar Azam (29) in the seventh over to Asif Afridi and Ahmed Shehzad (24) to Arshad Iqbal in the 10th over to slip to 71 for three at the halfway stage before finishing at 151 for nine.

Muhammad Akhlaq fought a lone battle with a breezy 62, but lacked the support and big-hitting from the other end as the required run-rate continued to climb. When he eventually departed at the total of 128 in the 17th, it was all over for Central Punjab who ultimately fell 36 runs short.

For Khyber Pakhtunkhwa, Shaheen Shah Afridi was the pick of bowlers with three for 25, while Arshad Iqbal and Imran Khan claimed two wickets apiece.

Earlier, Fakhar Zaman (26) and Rizwan provided Khyber Pakhtunkhwa a solid 67-run start before Adil Amin (18) and Rizwan stitched up a 45-run partnership for the second wicket. Iftikhar then featured in two useful stands – 39 runs for the fourth wicket with Sahibzada Farhan (12) and an unbroken 29 for the sixth wicket with Mohammad Wasim (11 not out) as the reigning champions added 91 runs in the last 10 overs to finish at 187 for five.

For Central Punjab, Hasan Ali was as impressive as ever with three for 30, while Ahmed Safi Abdulllah and Wahab Riaz picked up a wicket each conceding 23 and 31 runs, respectively.

Earlier, the second match of the national T20 tournament started between Khyber Pakhtunkhwa and Central Punjab at the Pindi Cricket Stadium.

Central Punjab won the toss and decided to field first. The star-studded Punjab team for the 2021 season would be aiming to lift the trophy for the first time since the revamped six-team tournament started two years ago.

Earlier in the day, Northern defeated Balochistan by six wickets in the opening match of the tournament.

Pakistan cricket officials earlier called up the Pakistan team squad after Kiwis' abrupt tour abandonment. The tournament was initially scheduled to be played in Multan which was later changed in wake of recent development.

Experts said the tournament will not only provide match practice to team Pakistan but also offers the chance to edge players to showcase their potential for induction in the Pakistan Super League 7 Player Draft.