Why Pakistan is Neutral in Syria 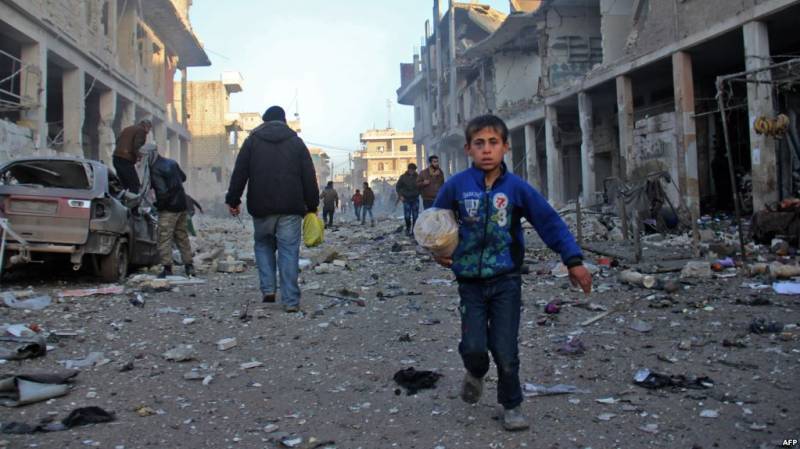 The Pakistani reaction to the April 13 missile attacks by the United States, United Kingdom, and France on Syrian chemical weapons facilities was bland. The official statement by the Ministry of Foreign Affairs was released late Saturday night, nearly a day after the attacks. Islamabad was silent and did not participate in the global discussion on Syria. On the website of the Ministry of Foreign Affairs, the statement on Syria carried an unusual title. It read, ‘Press Release’. Almost all other official statements on the site have titles indicating the subject. So, Syria is so untouchable in Islamabad that those drafting the statement apparently did not want to appear recognizing any action in Syria or taking any side. This is neutrality taken to a whole new level.

The statement itself should be taught in foreign service schools as an excellent example of how a nuclear power can juggle a ball in the air while walking a tightrope.

“Pakistan condemns the use of chemical weapons anywhere by anyone,” the statement said. “We call on all sides to refrain from actions inconsistent with the UN Charter […] It is important to establish facts through urgent and transparent investigations by the OPCW. We call upon all parties to strive for an agreement within the OPCW framework.”

The question then is: why issue a statement at all? The answer is important. The statement was necessary because Pakistan is a major country in the region, a player in the Middle East, and member of the declared nuclear powers club, less than eight countries out of nearly two-hundred states worldwide. So, Pakistan counts, and analysts, diplomats, and journalists were looking up Islamabad’s reaction after the strikes. Hence the statement, though it did not contain much.

But the delay in reacting to a major incident that impacts Pakistan’s immediate neighborhood indicates a weakness unbefitting a major nuclear power. While it is smart not to get sucked into an endless war in Syria that does not immediately impact Pakistani interests, Islamabad should not act so passively as to render its voice and position as unimportant as that of Djibouti or Yemen.

Developments in Syria impact Pakistan, and Pakistani policymakers can and should take clear positions on some aspects of the conflict without necessarily getting dragged into the war.

The first line of the official statement, ‘We are following the situation in Syria with grave concern’, is the correct start. The war in Syria has fundamentally changed power dynamics in the region and directly impacts Pakistani interests. We cannot pretend it doesn’t exist. Or we don’t.

Consider this: traditional allies of Pakistan like Turkey, Saudi Arabia, and the US are opposed to Assad. China, another ally, though not explicitly supporting Assad, backs Russia’s position. Moscow, with whom Islamabad is rapidly developing ties, is protecting Assad. In taking these positions, all these countries are pursuing core national interests. Islamabad, on the other hand, is not pursuing actual interests in Syria but is more concerned about balancing ties with all these major countries.

This is not wise.

Islamabad should establish its core interests in Syria. The conflict impacts Pakistan’s key alliances in the region, especially with Turkey and Saudi Arabia. The two have not asked Islamabad to reconsider but must be closely watching their longtime ally develop cold feet. Pakistani position on opposing regime-change through foreign intervention is principled and right, but what about regime’s violent response to peaceful protest leading to genocide and refugee influx? Iran is strongly supporting Assad, again based on core Iranian interests, but Mahmoud Sadeghi, a member of parliament from Tehran, stood in a session in March and urged his government and his country’s media not to be silent on Assad violently crushing peaceful dissent and punishing entire cities for opposing him.

While rightly opposing regime-change through foreign intervention, we need to debate the disproportionate use of force against Syrian civilians as punishment for peaceful dissent. Also recall how we twice supported the Afghans in regime-change in Afghanistan, first in 1988 and again in 1996. Our consideration was largely humanitarian, supporting the people against ruthless suppression.

A second consideration in Syria (again, like Afghanistan) is political. Russia’s key interest in Syria is geostrategic, followed by a friendly government in Damascus. Assad as a person and as a family rule is tertiary. Turkey, Jordan, Saudi Arabia, all close to Islamabad, have legitimate grievances against the Assad rule, and these grievances date back to 1970s, centering around Syrian meddling in these countries back when Damascus was powerful. We too have one grievance of our own: the role of the Assads in the 1981 hijacking of a Pakistan International Airlines plane. The Syrian government at the time did not take much time to decide what side it was on.

A third consideration for Pakistan in Syria is security. The conflict was partially the result of foreign intervention but originally created by the Syrian government through a violent crackdown on peaceful protest. The conflict has major security implications for Turkey, a steadfast ally. Thousands of Pakistani citizens were secretly recruited by Iran, a crucial neighbor, raising the ire of other players in the conflict. This recruitment has largely stopped. There are questions about trained Pakistani fighters in Syria who could impact Pakistani security when they return home. Then there is the question of chemical warfare. There could be a possibility that other actors in Syria used chemical weapons, like chlorine, but there is no doubt that the ability to handle and use sarin nerve agent rests squarely with the Syrian government. If this use becomes normal, it should ring alarm bells for us because we are surrounded by pockets of conflict where chemical weapons could be introduced if they become normal in Syria.

Pakistani diplomacy is astute and impressive on many occasions. But Syria is not one of them. We should stay out of the war, yet we cannot pretend it is not affecting us. We should be prepared.