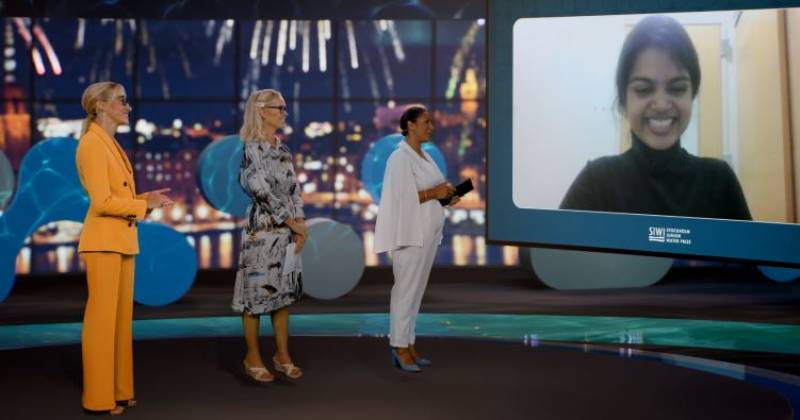 STOCKHOLM – Eshani Jha from the USA received the prestigious 2021 Stockholm Junior Water Prize for research on how to remove contaminants from water.

Crown Princess Victoria of Sweden announced the winner on Tuesday during an online award ceremony as part of World Water Week.

Stockholm Junior Water Prize is an international competition where students between the ages of 15 and 20 present solutions to major water challenges.

The winner Eshani Jha is a student at Lynbrook High School in San José, California. She has done research on how to remove contaminants from our freshwater in a simple and cost-effective way. The process involves replacing active carbon with biochar for use in efficient and cheap water filters.

“I am honoured to receive this prize, particularly with so many excellent contributions from around the world. I hope we can work together in the years to come, for a better water world. We really are the future of water-related science,” said Jha.

Her invention targets certain classes of contaminants, particularly pesticides, emerging contaminants, and heavy metals. She explains that she has enhanced the biochar’s ability to act like a sponge for these contaminants, creating a ‘super sponge’.

“I see a multitude of applications for this, and I also see great potential in targeting other contaminants too. My ambition is that this should be a one-stop water filter,” she said.

The winner was announced by HRH Crown Princess Victoria of Sweden, the Prize’s Official Patron, who also expressed great admiration for all the finalists.

A Diploma of Excellence was awarded to Thanawit Namjaidee and Future Kongchu from Thailand, for developing a way to use organic waste material for moisture retention, thereby accelerating plant growth.

The Stockholm Junior Water Prize has been organized every year since 1997 by the Stockholm International Water Institute, SIWI, with Xylem as Founding Partner. This year the event was held online.

“Stockholm Junior Water Prize celebrates young people’s determination to be part of a better future. The passion and ingenuity that all participants show is truly inspiring and an important contribution to the global water world,” said Torgny Holmgren, Executive Director at Stockholm International Water Institute.

“These winners are part of a global movement,” said Patrick Decker, Xylem’s CEO. “We’re so inspired by them – and all 125,000 entrants in 25 years of the Stockholm Junior Water Prize. A generation of young people motivated to solve society’s biggest water challenges, can and are changing the world. We’re so proud to champion their innovation by sponsoring this great Prize.”