US relations with Pakistan 'very good one': Trump tells rally in India 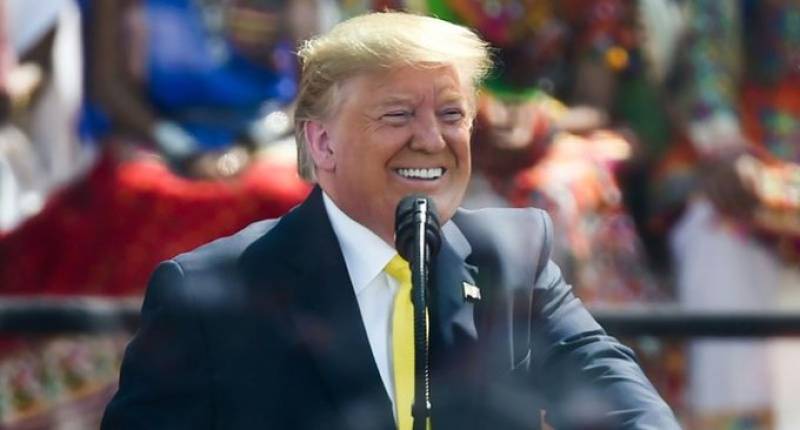 ISLAMABAD – The roars of appreciations turned into a pin drop silence at the crowded stadium of Indian city of Ahmedabad as United States President Donald Trump said the Pakistan-US relationship was "very good one".

There was a huge applause going on as Trump, who arrived on the two-day maiden Indian visit, spoke of his country's anti-terror efforts and the US-Indian ties with Narendra Modi also seen joining the crowd for ovation.

Suddenly, to the shock of the crowd, Trump turned the course of speech towards the Pak-US relations saying "Our relationship with Pakistan is a very good one".

This turned the otherwise cheering crowd to a mute bringing a visible perturbation to the people particularly the front rowers comprising the cabinet members of Bharatiya Janata Party (BJP)-led government, which is currently faced with public wrath over the passage of anti-Muslim citizenship laws on domestic front and on international front for human rights abuses in the Indian Occupied Jammu and Kashmir.

Trump, who had met Prime Minister Imran Khan thrice since the latter assuming the prime minister's office in 2018, had repeatedly offered his mediation between Pakistan and India on Kashmir – a dispute which had drawn the world's reaction over after the Indian unilateral action of August 5,2019 revoking the autonomous status of the disputed territory.

Talking about the US anti-terror efforts, Trump said since taking his office, his administration was working in a very positive way with Pakistan to crack down on terrorist organisations and militants.

"Thanks to these efforts, we are beginning to see signs of big progress with Pakistan and we are hopeful for reduced tensions, greater stability and the future of harmony for all of the nations of South Asia," Trump told the gathering.

He, along with first lady, daughter and son-in-law, was scheduled to visit Taj Mahal, a wonder currently mired in controversy with some BJP leaders arguing that it had no place in the country's heritage for being built by a Muslim ruler.

Contrary to the hype created by the Modi government on the Trump's visit, the Indian politicians are dubbing the visit as meaningless having nothing substantive for India.

"There is absolutely no substance in the visit of the US president. It is only a spectaclization of the diplomacy. What you will see unfold in next 36 hours after Donald Trump lands in Ahmedabad is nothing but a spectacle and tourism," said Congress Leader Manish Tiwari, also a former Indian Information Minister in his comment.

About the ongoing regional developments particularly the US-Taliban deal, the Congress leader said, "That deal is heavily loaded in favour of Pakistan. India is absolutely nowhere on the table... There is airy fairy blue dot strategy which the people are talking about."

CHANDIGARH, Haryana - A village in northern Indian state of Haryana renamed itself "Trump Village" on Friday in an ...