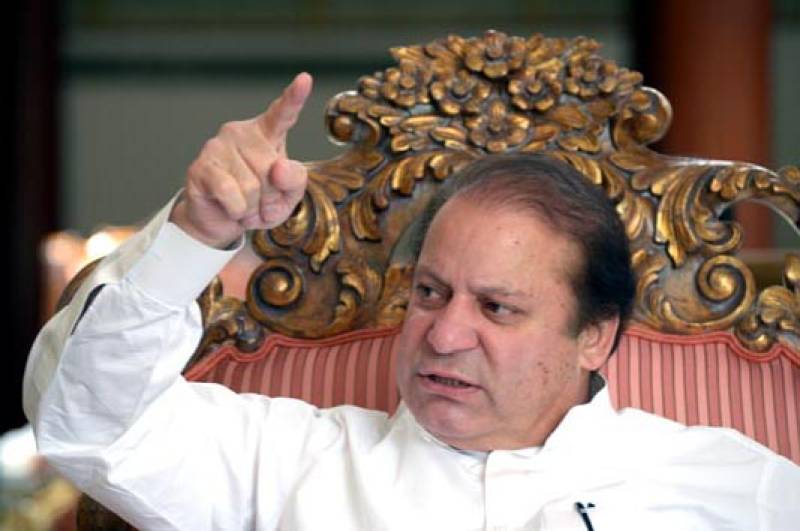 A Pakistani journalist last Friday tweeted “Today, three foreign publications (The Economist, Wall Street Journals and Los Angeles Times) have reported on mass scale rigging being done, what they allege, to ensure the victory of PTI.

Two days ago, Financial Times declared it the "dirtiest election" of Pakistan.” Among those who commented included former Dawn editor Abbas Nasir who plugged his recent NYTimes article on the subject.

On the thread, Richard Harris remarked, “Because they have all regurgitated the narrative that you and your colleagues have spun...Classic deception, make a whole cry with allegations without proof, get the international media to cover it, then use that coverage as proof of our earlier assertions!”

Since the Pakistan Tehreek-e-Insaf (PTI)’s protest sit-in against the alleged rigging in the last general elections, some individuals who identify themselves as liberals seem to have increasingly tried to assert that General Ziaul Haq’s protégé Nawaz Sharif is the anti-establishment hero Pakistan had been waiting for.

Indeed, rigging in elections, corrupt politicians, and military interference in Pakistani politics are an established reality.

Back then, these individuals have accused the PTI of staging the protest as part of the military establishment’s agenda to derail Nawaz government. The PTI demand was a recount on four National Assembly constituencies.

The allegation raises a couple of important questions. First, was the Nawaz government stopped by the military establishment not to allow a recount? Second, had the then army chief General Raheel Sharif backed the PTI protest, a political party that gained the second most votes in 2013 elections, would the Nawaz government had survived? The same General Raheel Sharif was later given a NOC by Nawaz allowing him to lead the Saudi-led military alliance. Interestingly, it was the PTI that opposed the decision.

As a further point of inquiry, it is well published that during the rule of Shehbaz Sharif as Punjab chief minister from 2008 till 2013, organisations such as Lashkar-e-Jhangvi (LeJ), the Punjabi Taliban and the Ahle Sunnat Wal Jamaat (ASWJ) gained strength in the province.

During the last general elections, the PML-N was criticized for a seat-to-seat adjustment deal with the ASWJ and was among the few parties that faced no threat from the Taliban. Interestingly, the then head of the ISI General Zaheerul Islam, who has been accused of supporting the PTI anti-rigging sit-in against the PML-N government by Nawaz supporters, after his retirement in a statement said that the LeJ was “more lethal outfit” than the Taliban.

Indeed, the incumbent DG ISI Lt Gen Naveed Mukhtar was said to have been handpicked by Nawaz and is reportedly related to Maryam Nawaz.

Moreover, last year PML-N leader and former information minister Marriyum Aurangzeb said that the PTI was being funded by Jews and other foreign actors, who financed the sit-ins and protests to destabilise the political system of Pakistan.

Today, these individuals ask why just Nawaz is being held to account. Why not the judges and the generals? What about other politicians? Are they not corrupt?

First, Nawaz has formed the government in the centre thrice, and in Punjab six times. So, the longer you have enjoyed time in power, the longer the audit. Second, if other politicians, judges and generals are corrupt whose responsibility was it to hold them to account? Who was in power during the last 10 years in Punjab and five years in the centre?

These individuals ask why is General Musharraf not behind bars for staging the military coup, and violation of civil liberties of Pakistanis? A valid question, but again was it not the Nawaz government’s responsibility to hold him to account? Did they strike a deal and let him go, or did they come under pressure? In either of the cases, why should a weak leader or one who became an accomplice, be respected?

It is important to ask can those who were handpicked by a military dictator and benefitted from their ties with the security establishment for years, reform it?

Liberals in Pakistan are dominated in representation in terms of proportion to population size by minority non-Punjabi ethnic groups, and religious minority groups prominent among them Shia Muslims. Mistakes of the past, have made many see Punjab as the primary usurper [Indeed, millions of Punjabis live in poverty, and thousands of children are out of school in Islamabad].

The establishment is dominated by Punjab due to the province’s large population size. Liberals have long hoped for a Sunni Muslim leader from Punjab to stand up to the military establishment. [Indeed, the 18th amendment was a step in the right direction by the PPP government.]

Today, these individuals who identify themselves as liberals seem to believe and wrongly portray Nawaz as a long-awaited saviour from Punjab “defying” the establishment. The PML-N was voted to power six times in Punjab. They have been in power in Punjab for the past 10 years straight.

Is the PML-N record while in power, worthy of the way some are trying to portray them as? Is it wrong to ask, how can those who perpetuated an unjust system and benefitted from it, be the answer to the protracted problems of the working classes?  Indeed, no. Nawaz is not the hero, Pakistanis are being told, they have been looking for.

Past is the mirror, which helps us determine the future. Even if we forget Nawaz’s past, the General Zia days, the IJI, the Asghar Khan case, recognizing the Taliban government in Kabul, sectarianism in Punjab, the present is not so different.

The PML-N leader and former prime minister Shahid Khaqan Abbasi recently met ASWJ leaders and sought their support. Just a few months ago, Nawaz recalled how General Zia lauded him for building a road from Rawalpindi to Murree.

The PML-N top leaders have frequently made misogynistic remarks against women belonging to opposition parties.  They have frequently hit out at Imran Khan for “ties to Jews” [indeed, they seem ignorant of the fact that the history of the three monotheistic religions Judaism, Christianity and Islam overlap, and they share many commonalities].

Banned religious outfits continue to operate in Pakistan despite 10 years of civilian rule. The JUI-F, a religio-political party with an obscurantist worldview, remains an ally of the PML-N. The PML-N is a party that promotes dynastic politics. Economic disparity in Punjab is known to all. Should all this be ignored, brushed under the carpet, and forgotten?

The number of terrorist incidents and fatalities due to terrorist violence has gone down across Pakistan post-Army Public School massacre in 2014, and peace has been restored to a considerable degree in the volatile city of Karachi. [Extremist mindset within Pakistan’s society, indeed, remains a problem and requires a more persistent and concerted effort from all stakeholders.]

Why should the role of the army, the Rangers, former interior minister Chaudhry Nisar, and the Khyber-Pakhtunkhwa police, in achieving this relative peace, not be acknowledged?

Those portraying Nawaz as a victim of army’s overreach, seem to be understating serious allegations of financial corruption against the Sharifs and other PML-N leaders, and their obscurantist worldview.

The same individuals seem to portray army as behind the rise in popularity of the PTI. Interestingly, the assertion needs to be weighed against certain facts that speak contrary to the argument being pushed.

For instance, the mullah-military alliance has long been considered important to the role of the army in Pakistani politics. The revival of the MMA, of all parties, hurt Imran Khan’s PTI the most. As PTI has lost the support of the Jamaat-e-Islami.

Many other political parties such as General Pervez Musharraf’s APML, the TLY, the MML under the umbrella of AAT, the PRH party among others are in the field on separate platforms. Chaudhry Nisar is contesting as an independent.

Pakistan’s security establishment has long worked closely with the Saudi security establishment. It was, in fact, Imran Khan who opposed sending of troops to Yemen. Prime Minister Nawaz Sharif had asserted that any threat to Saudi Arabia’s territorial integrity would evoke a strong response from Pakistan.

Imran Khan had urged role of a negotiator for Pakistan, not of a participant in the conflict. The PTI also opposed giving NOC to General Raheel Sharif allowing him to lead the Saudi-led military alliance.

One of the issues long raised by the civil society, and recently by the Pashtun Tahaffuz Movement (PTM) is that of the missing persons. The PTM leaders have come under fire from the army chief for their outspoken criticism of the Pakistan Army.

General Bajwa has indirectly termed their protest demonstrations as “engineered”. The PTI Chairman Imran Khan in a recent interview has announced not to field a candidate on National Assembly constituency against Ali Wazir, a candidate from South Waziristan, belonging to the PTM. Imran Khan, last April, also endorsed many demands of the PTM.

At times the military establishment’s capacity to “gather” large crowds for their alleged favoured leaders is overestimated in the press, and at times apparently exaggerated on purpose. When General Musharraf returned to Pakistan in 2013, no more people came to welcome him at the Karachi airport than what one sees at a South Asian wedding reception.

The length of Imran Khan’s sit-in and the crowds he has attracted over the last seven years in cities such as Karachi and Lahore are way beyond the capacity of the military establishment.

Corruption is rampant in Pakistani politics, and its prevalence is undeniable. In the last few years, some within the liberal segments of Pakistan’s society have extended Nawaz and his party, near blanket support, to block what they see as military’s return to power. Oblivious they seem, to the fact, that their support to a group of corrupt political leaders with a history of ties to the military establishment itself, and proven ties with extremists that exist till date, is not and will not help the cause of democracy.

After the anti-corruption court’s verdict against Nawaz, some have argued why corrupt generals and judges have not been brought to justice. For the last 10 years, Nawaz and Asif Zardari ruled Pakistan, the buck stopped with them.

In Pakistan, the struggle for real democracy and against the extremist mindset is not over. What is certain is those who have participated in creating the mess, and benefitted from it for years, must not be trusted again.

The author is a former visiting researcher at Georgetown University, Washington DC, USA.

A Bumpy Road to the US Elections: Trump and Hilary face-off likely