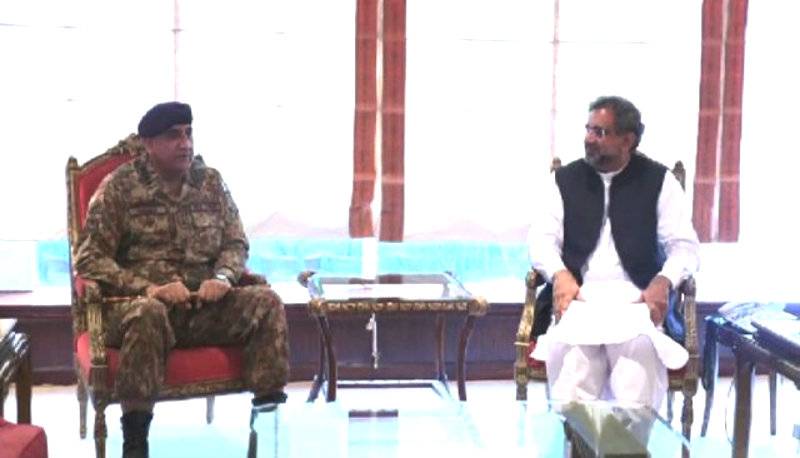 ISLAMABAD - Pakistan Army, the most powerful institution in the country, has been totally silent on the ouster of Nawaz Sharif from PM Office by the Supreme Court over corruption charges late last month. But as actions speak louder than words, power dynamics seem to be changing now based on who’s sitting next to whom and where.

While the army chief discussed "professional matters pertaining to the Pakistan Army" with the new PM, Mr Abbasi applauded the Pakistan Army's achievements in Operation Raddul Fassad and Operation Khyber IV, saying that "the entire nation is proud of the sacrifices rendered by security personnel in ridding the motherland of the menace of terrorism".

Civ-Mil rebalanced, again. Back to the days of the Raheel-style neck to neck bilat, not the across the desk huddles Bajwa & Nawaz had. pic.twitter.com/PeohESGDyH

It was yet another meeting between the two most powerful men in Pakistan, but the seating arrangement was something ‘unusual’ or rather more than usual – as seen in past few months.

Many might wonder what had been wrong in the meetings between former PM Nawaz Sharif and incumbent COAS Gen Bajwa who were never seen sitting together side by side but only across the desk – unlike in Gen (r) Raheel Sharif’s tenure. Perhaps the new General is actually very low-key than his popular predecessor, but this has still nothing to do with the seating arrangement. 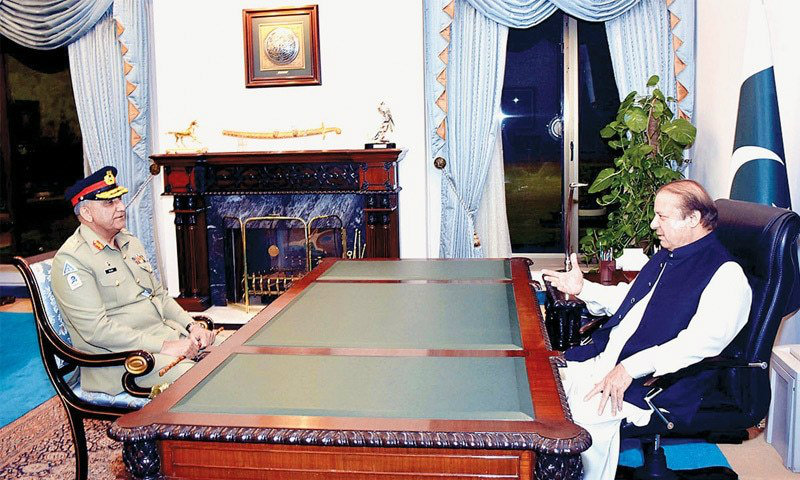 One may argue but civil-military relations in Pakistan haven't been running as smooth as during the time Gen Sharif was holding Malacca Cane – the command stick. Although it was before Gen Bajwa that the Nawaz-government and the Army embroiled into the DawnLeaks scandal sending waves across the world, it was settled amicably soon after the current COAS, flanked by the DG ISI, called on the ex-PM in Islamabad just in time of the PanamaCase JIT formation. 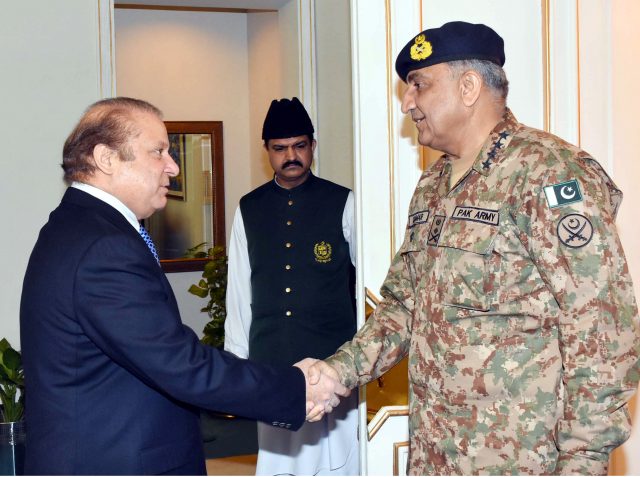 No seating arrangement in sight; only a handshake.

‘Political talk is in the political domain’

New PM Abbasi was elected after Nawaz Sharif was disqualified for being "dishonest to the parliament and the courts in not disclosing his employment in the Dubai-based Capital FZE company in his 2013 nomination papers”.

"The JIT was made by the Supreme Court. Two of its members belong to the Inter-Services Intelligence and Military Intelligence. It is a sub judice case, and it will go to court," he had said in a press conference prior to the verdict.

"There is no direct army involvement in the JIT," he had asserted. "Political talk is in the political domain."

When Nawaz Sharif became prime minister for a third term in the summer of 2013, there was some optimism that the balance of power was finally swinging in favour of the civilian leadership. The same year, Gen (r) Raheel Sharif was appointed army chief by Nawaz Sharif. 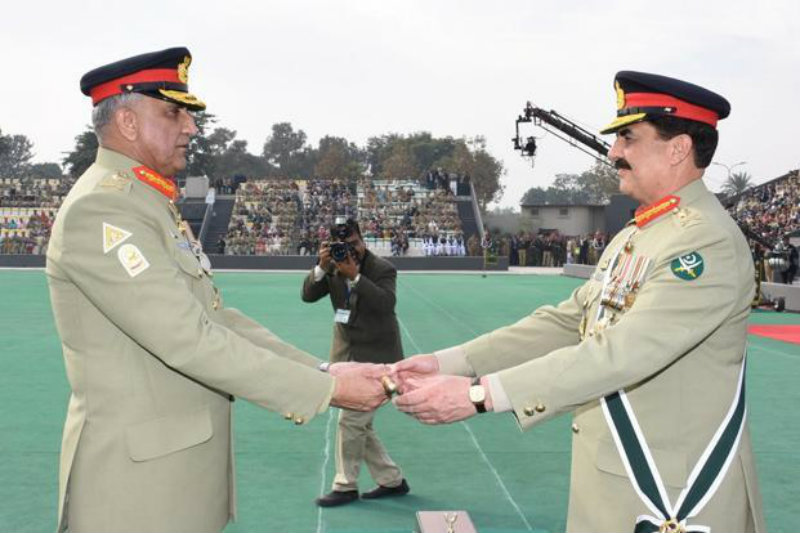 In the first few months of that period, civilian control over what the military traditionally considers its own domain – national security and foreign policy – seemed to be growing. The government initiated talks with Taliban militants in the tribal backyard of Khyber Pakhtunkhwa and tried to open dialogue with separatists in Balochistan despite the military’s reservations on both counts.

On the external front, peace overtures were made to India with promises of much-delayed liberalisation of bilateral trade, and Afghanistan was assured of any support it required for the resolution of its seemingly eternal conflict. 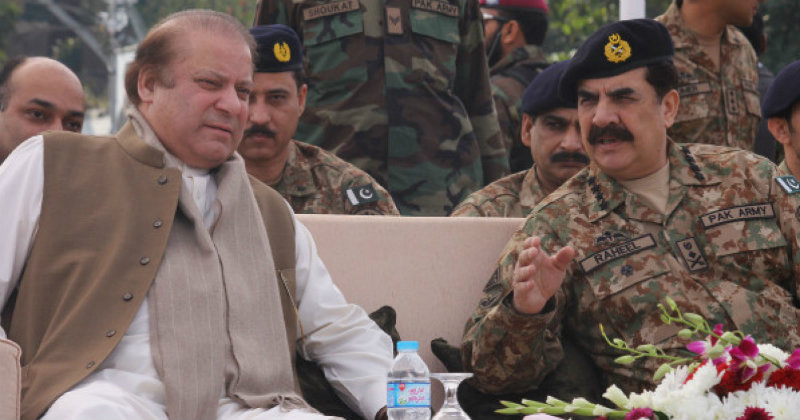 In 2015, Raheel Sharif’s popularity grew out of the barracks and spread across Pakistan, making him more popular than any politician including Prime Minister Nawaz Sharif and Pakistan Tehreek-e-Insaf (PTI) chief Imran Khan.

The reasons for his popularity were not difficult to comprehend in times of rampant terrorism, insecurity, corruption and a general disappointment with politics. Gen Sharif is widely credited with improving security in the country in general and Karachi in particular. He is also hailed for launching an anti-corruption drive, mostly focused against politicians.

It might be one of main reasons that General Sharif (not related to Nawaz Sharif) was seen sitting with the former PM in a position more balanced than that of the new commander-in-chief. 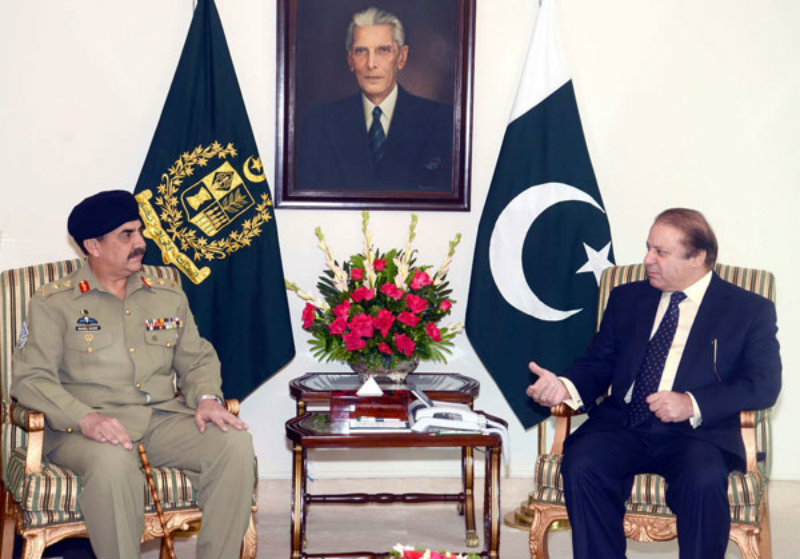 Well, now as Nawaz Sharif is gone for the third time in another ‘unusual’ fashion, also historical in many terms, PM Abbasi besides running a weak government has the delicate task of making civil-military relations durable. Perhaps a slight change in seating arrangement is the first of many steps ahead.