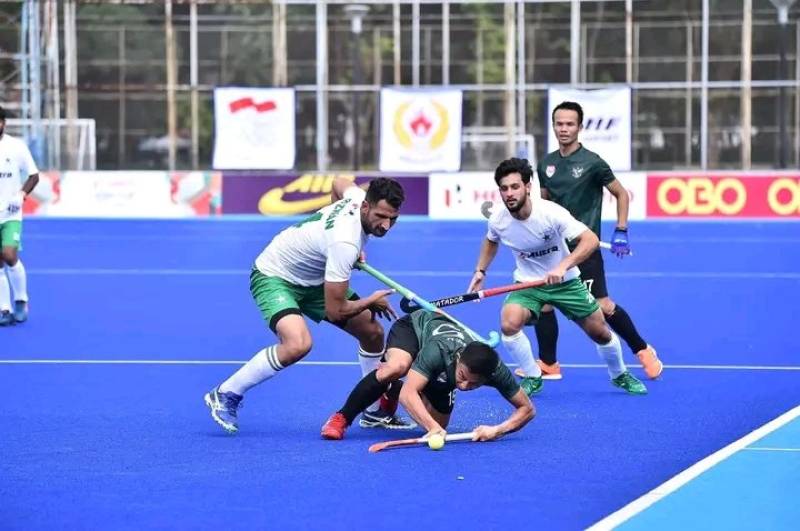 JAKARTA – Pakistan crushed host Indonesia by 13-0 in a one-sided game in the ongoing Asia Cup 2022 on Tuesday.

For the Green Shirts, Rizwan Ali scored a hat-trick. It was Ahmad Ajaz who opened the scoring for team green in the first minute of the game. Rizwan was awarded man of the match for his double goals in the Hero Asia Cup 2022.

Rana Abdul doubled the lead in the third minute of the game. Abdul Manan and Ali Mubashar scored two more goals in the quarter to make the scoreline 4-0 for the Asian giants.

2nd Man of the Match in a row for Team Pakistan. Rizwan Ali was awarded man of the match for his superb 2 goals against Indonesia in the Hero Asia Cup 2022. #pakistanhockey #asiacup2022 #pakistan pic.twitter.com/HcyFb4WZlW

Team Pakistan got off to a flying start and put Indonesia under pressure, who earlier conceded a 9-0 defeat against Japan in their maiden game.

At the interval, the visitors advanced their lead to 9-0 while all attempts from the hosts remained unsuccessful as Pakistan continue to dominate the game with three more goals in the third quarter.

Pakistan captain Umar Bhutta said the victory by a huge margin has boosted the confidence of all players. Commenting on the crucial game against archrival India, the skipper admitted missing chances.

On Monday, the Pakistan hockey team drew against arch-rival India in the first match for both teams at the Asia Cup. Both sides have won the Asia Cup three times each.

Meanwhile, Team Green is set to face Japan on Thursday.