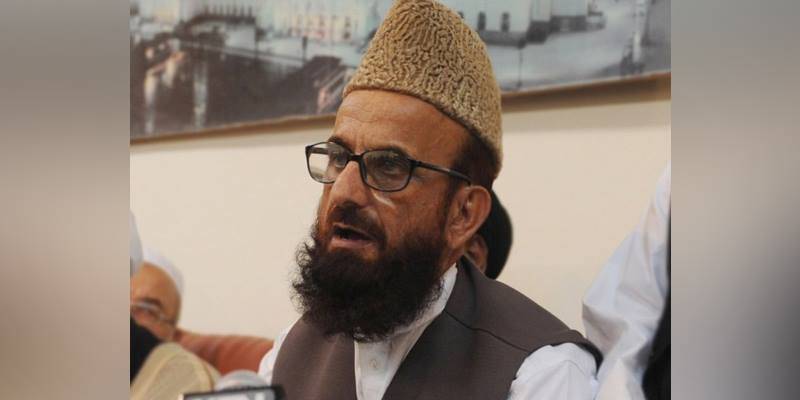 KARACHI - Ruet-e-Hilal Committee Chairman Mufti Muneeb ur Rehman was detained in his house on Saturday amid the country-wide crackdown on Tehreek-e-Labbaik Pakistan (TLP) and Tehreek-i-Labbaik Ya Rasool Allah (TLYRA), local media reported.

Authorities have barred the renowned cleric from leaving the house and holding meetings with people, an action that comes a day after TLP chief Khadim Hussain Rizvi and other active leaders of the religious groups were detained by the police on Friday night.

The leaders of these parties are of the views that Rahman was a respectable person for all sects and he had no links with the politics. "Detaining him reflects worst dictatorship," they said.

There is no official statement so far.

On Friday night, the chief of TLP was taken into custody by Punjab police amid a massive crackdown on the religio-political party on Friday.

The firebrand cleric, 52, was arrested from Lahore's Hanjarwal area just two days ahead of his party's planned rally to Rawalpindi.

Confirming his detention, Information Minister Ch Fawad Hussain said the cleric has been "taken into protective custody by police and shifted to a guest house." He added that it is "to safeguard public life, property and order and has to do nothing with Asia Bibi case."

Khadim Hussain Rizvi has been taken into protective custody by police and shifted to a guest house.They insisted to come to Rwp refusing Governments proposal for alternative arrangements
It’s to safeguard public life, property and order and has to do nothing with Asia Bibi case

Tehreek-e-Labbaik Ya Rasool Allah's Chairman Dr Ashraf Asif Jalali has also been detained, according to reports in local media.

A video, circulating on the social media, shows the wheelchair-bound cleric being taken away by his disciples moments before his detention.

Meanwhile, a major police crackdown is underway across Punjab to foil TLP's gathering in the federal capital.

Rizvi has criticised the state institutions including the government, military and the judiciary on numerous occasions, most notably after a failed round of negotiations between the TLP and the government over the acquittal of Asia Bibi, a Christian woman on death row for blasphemy.

ISLAMABAD - Negotiations between the government and Tehreek-e-Labbaik Pakistan (TLP) have reached an agreement to end ...

In another development, TLP's Pir Afzal Qadri has given a call of countrywide shutdown to protest the crackdown on his party leaders.

The DawnNews reports around a 100 police personnel have been deployed at Faizabad interchange, where the TLP had last year staged a 20-day long sit-in.

At least 59 TLP leaders and workers have been detained in several raids in Rawalpindi district.

The district authorities in Rawalpindi have issued detainment orders for TLP divisional leader Inayatul Haq. According to the notification, Haq will be detained in a jail for 15 days.