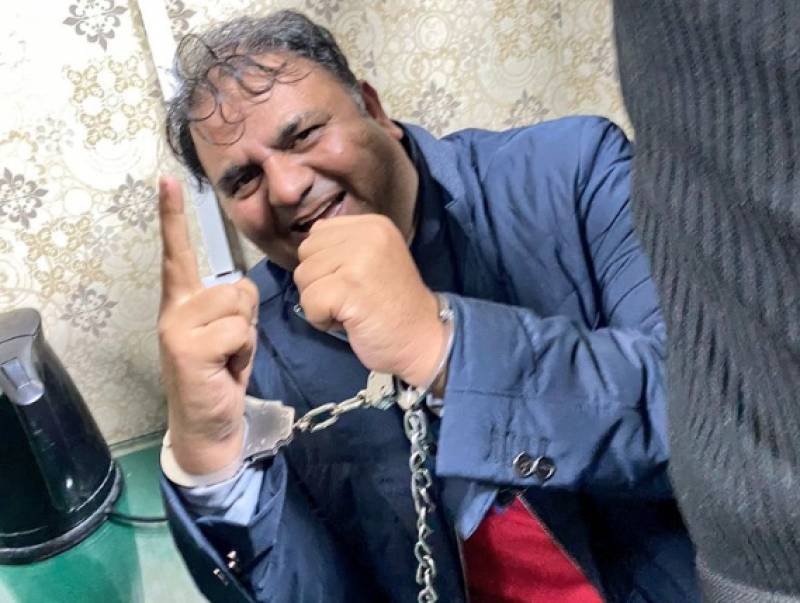 LAHORE – The Lahore High Court (LHC) on Wednesday disposed of the petition filed for the recovery of the Pakistan Tehreek-e-Insaf (PTI) leader Fawad Chaudhry.

Fawad Ch’s cousin, Nabeel Shehzad, moved the LHC for the “recovery” of the former federal minister in a habeas corpus petition.

Justice Tariq Saleem Sheikh of the LHC heard the petition and disposed of the plea, saying that he was taking up the matter of habeas corpus. Now Fawad was produced before a court in Islamabad, the judge remarked.

Earlier, the court summoned the inspector generals of Punjab Police and Islamabad after the authorities failed to present Pakistan Tehreek-e-Insaf (PTI) leader Fawad Chaudhry before the court.

Fawad Ch was arrested from his residence earlier today after he “threatened” the members of the Election Commission of Pakistan (ECP) in a media talk outside Imran Khan’s residence in Zaman Park.

The petitioner had filed a habeas corpus plea and urged the court to “recover” the PTI leader after the Islamabad police acquired his transitory remand.

At the resumption of the hearing at LHC, Fawad Ch’s lawyer informed the court that the motorcade transporting Fawad has left for Islamabad.

The government’s lawyer said that he is unable to state Fawad’s exact location.

At this, Justice Sheikh asked the lawyer how long it will take for him to inquire about the location.

The lawyer said that he needs half an hour.

“Bring him back even if he is taken to Islamabad,” Justice Sheikh remarked before adjourning the hearing for a while.

When the case resumed, Justice Sheikh inquired where the PTI leader was.

The government lawyer responded by saying that that he has spoken to everyone and the PTI leader was not in the Punjab Police’s custody.

“Call IG Punjab,” responded Justice Sheikh. The judge after passing the remarks said that the police chief was not available at the moment.

The judge then issued orders to IGs Punjab and Islamabad to appear before the court at 6pm.

“First present Fawad and then I will hear you,” remarked Justice Sheikh before issuing the summoning orders.

PTI Chairman condemned the arrest of the party leader with a tweet.

I will be doing media talk 4 pm today. Fawad's arrest on his apt description of the CEC leaves no doubt in anyone's mind that Pak has become a banana republic devoid of rule of law. We must stand up for our fundamental rights now to save Pak's drift towards a point of no return.