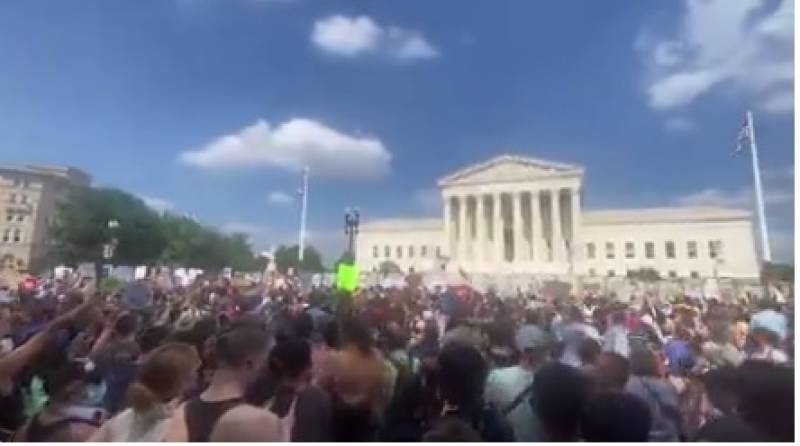 NEW YORK – In a landmark verdict, the US Supreme Court has overturned the almost 50-year-old ruling that had recongnised a woman’s constitutional right to abortion.

In 1973, the top court had legalized the abortion as a constitutional right in its landmark ruling in a case better known as Roe vs. Wade and it has been the law of the land since then.

Now, the court in its 6-3 ruling has declared Roe vs Wade verdict that allowed abortions between 24 and 28 weeks of pregnancy as wrong, adding that abortion rights are not mentioned in the US constitution.

“The Constitution does not confer a right to abortion; Roe and Casey are overruled; and the authority to regulate abortion is returned to the people and their elected representatives,” read the verdict.

The Supreme Court issued the ruling while hearing a case, Dobbs v Jackson Women's Health Organization, that was lodged against Mississippi's ban on abortion after 15 weeks.

The ruling has formally abolished the constitutional right to an abortion.

The verdict has drawn massive criticism from government officials and human rights bodies.

President Joe Biden called it a “very solemn moment for the United States”.

“The Supreme Court expressly took away a Constitutional right from the American people that it had already recognized. They simply took it away. That's never been done to a right that is so important to so many Americans,” Biden said in its statement.

Vowing to take all possible measures for protection of women’s abortion rights, he said that the only way to ensure protection in vote.

“Let me be very clear and unambiguous: The only way we can secure a woman’s right to choose and the balance that existed is for Congress to restore the protections of Roe v. Wade as federal law.

“No executive action from the President can do that.  And if Congress, as it appears, lacks the vote — votes to do that now, voters need to make their voices heard,” he said.

“This fall, we must elect more senators and representatives who will codify a woman’s right to choose into federal law once again, elect more state leaders to protect this right at the local level,” President Biden added.