Contingent of security forces deployed in twin cities, containers placed to shut down roads amid clashes 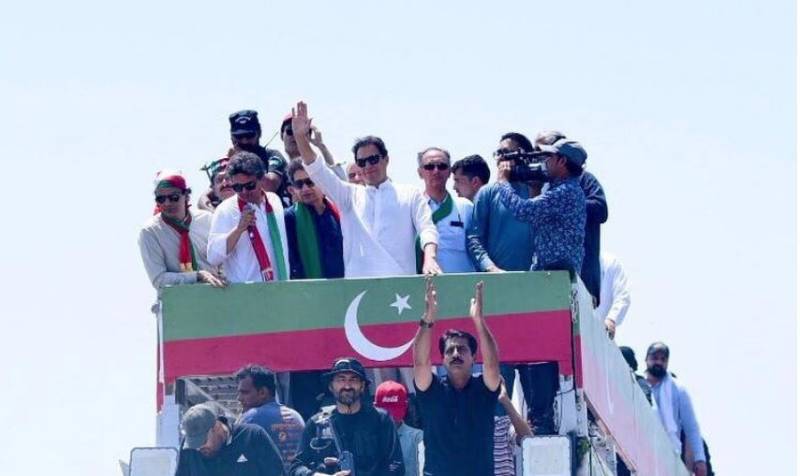 ISLAMABAD – Former prime minister Imran Khan has denied rumours of a deal with the coalition government and said ‘absolutely not’ to any such scenarios.

The defiant leader urged the people of the twin cities to join PTI's march, announcing that they will remain in the federal capital till the announcement of dates for elections and dissolution of assemblies.

Khan earlier arrived at Wali interchange in KP and then left for Islamabad as party leaders moved to the federal capital from their respective areas.

Would urge everyone to carry the Pakistan flag with them. This is a defining moment today for the Haqiqi Azaadi of Pakistan.#حقیقی_آزادی_مارچ pic.twitter.com/RXUPKFyYgQ

Addressing charged party supporters in KP, the PTI chief said no one can stop us, as he vowed to reach Islamabad's D-Chowk. Khan made the announcement after authorities blocked roads leading to the capital amid clashes with agitators.

Khan asserted that the incumbent government was afraid as they had been plundering national wealth for years. He added that staging a protest was the party's right, adding that he would unite the country and make it a nation.

Earlier in the day, PTI and the incumbent government engaged in dialogue however, no breakthrough was reported.

Political tensions are at an all-time high in South Asian country with all eyes on the capital as the city braced itself for the arrival of charged workers and leaders of the former ruling party who are heading towards Islamabad.

Sharif-led government has further imposed a ban on gatherings under Section 144 of the Code of Criminal Procedure while commuters in the twin cities and in Lahore faced hardship and traffic congestion amid blockades and other barricades.

All routes from Rawalpindi to the capital were sealed with containers and routes leading from Rawat Chowk to Islamabad Expressway were closed. The Famous Faizabad area was also sealed from the Express Highway, IJP Road, and Murree Road.

Security forces were on high alert and the government has given instructions to take stern measures to quash the PTI's ‘Azadi March’.

Scores of PTI workers were detained after the clashes and the former Punjab health minister Yasmin Rashid was also held briefly, with PTI leaders claiming that the police tried to ‘snatch her car keys’.

In a video clip of the incident, a purported PTI supporter resisted the arrest of the former minister. senior party Andalib Abbas was also detained near Ravi road.

Amid the crackdown and clashes, PML-N Vice President Maryam Nawaz alleged that the Punjab police had recovered weapons from the vehicles of PTI Lahore office-bearers Zubair Niazi and Bajash Niazi.

Weapons recovered by punjab Lahore police from vehicles of PTI Lahore office bearers Zubair Niazi and Bajash Niazi. Case registered. This is the ugly face of the so called Long March. These are the intentions. pic.twitter.com/oGZHituEgf

The daughter of the PML-N supremo shared the pictures of the cache recovered and wrote, “This is the ugly face of the so-called long march. These are the intentions.”

ISLAMABAD – The Supreme Court of Pakistan Wednesday directed the administration of the federal capital to provide ...